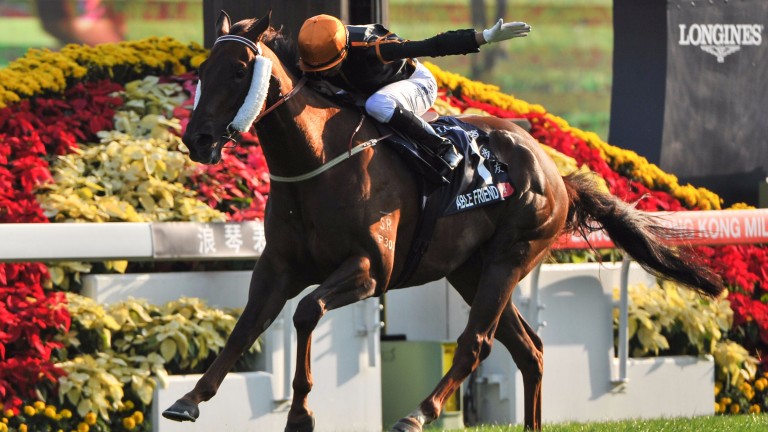 John Moore is certain of two things. The good is that he knows, at his best, Able Friend is considerably better than his rivals in a weak-looking Group 1. The bad is he also knows Able Friend is not at his absolute peak after a setback left him one race short.

How far short, and how much he has in hand, are the vital questions. Moore believes he could have as much as three lengths in hand at his best and believes the seven-year-old is just two lengths off his best, which makes for a confident man.

Ryan Moore's hopes of sweeping the Group 1s could rest on Neorealism, whose best form is over further than today's trip. Moore rides the favourite in the other three Group 1s but Neorealism is the third choice of the bookies.

Many of the locals believe Helene Paragon's last run deserves a severe upgrading and John Moore views his second string as the main danger. For what it's worth, Logotype is an absolutely gorgeous horse and he beat none other than Maurice on his last start at the trip.

John Moore, trainer of Able Friend and Helene Paragon
He injured a tendon in this last year and it's totally healed up but when we got him back here he spooked and injured himself, which cost us a month and so he's one run short. I'm hoping we've done enough to win but his draw in 14 isn't a help. I think my other horse, Helene Paragon, is the one he has to beat. He should have won the Group 2 last time. He got interfered with at a crucial stage and Hugh Bowman felt he had plenty left. Able Friend is much the better of the two. He'd be three lengths better and he might be two lengths short, so I'm optimistic his talent can get him through.

Tsuyoshi Tanaka, trainer of Logotype
The two gate is a good draw for him. He gave a good response yesterday when he galloped and moved very nicely. Everything has gone well so far, which is a great thing for us.

Zac Purton, rider of Beauty Only
He's probably my best chance in the Group 1s. He's going really well and never runs a bad race. He won the Mile trial on a shifty track, which he didn't really enjoy as he likes a hard surface. I think he can be a player.

Noriyuki Hori, trainer of Neorealism
This is his first time travelling abroad, so it has taken him a bit longer to adjust to his new surroundings. We sent him out for a light gallop and since it is just two days before the race it wasn't hard work, just a light tune-up. We wanted Ryan to get a feel for him and let the horse get used to the cheekpieces he will use on Sunday.

Aidan O'Brien, trainer of Cougar Mountain
We were pleased enough with his last run [Breeders' Cup Mile at Santa Anita]. He was drawn wide, was checked in his run, was running on at the finish, and not beaten that far. He's got the potential to win a Group 1. He's a good traveller and is a fast-ground horse.

FIRST PUBLISHED 6:00PM, DEC 9 2016
He won the Mile trial on a shifty track, which he didn't really enjoy as he likes a hard surface. I think he can be a player