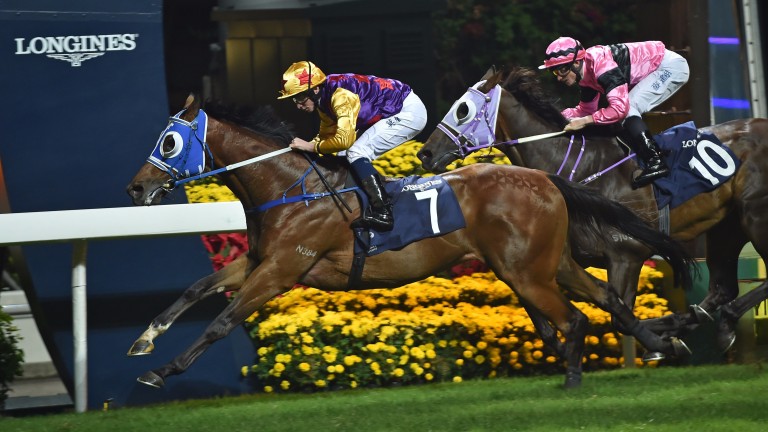 His WBJ belt, which he officially collects for the second time on Friday, may not be on the line but the IJC belt – which is currently held by another contender, South Africa's Gavin Lerena – is up for grabs.

Moore has won it twice before and was second last year, so is no stranger to the idiosyncrasies of Happy Valley, and he has been priced up as the 15-4 joint-favourite along with Hugh Bowman after drawing rides on Catchmeifyoucan, Giant Turtle, Midnite Promise and Beauty Prince.

Moreira, another former winner and Hong Kong's record-breaking reigning champion jockey, is priced up at 13-2 but is hopeful he can mount a serious challenge.

"Winning would mean job done," he said playfully, before adding: "It's a very tough job to get done but it's always a pleasure to ride in this kind of competition and if I could win I would be delighted. I know I have chances – Good Choice [in leg two] is probably the best of them."

Moreira's knowledge of the local form is a big advantage over the international contenders and Lerena, priced up locally at 8-1, admitted he did not know too much about his chances of defending his title.

"It's fantastic to be here and I'm going in to enjoy myself and hopefully I'll give every horse a chance of winning."

Pat Smullen, Ireland's nine-time champion, is the ninth choice of the punters at 13-1. But Smullen, who heads home on Friday, has travelled to Hong Kong to be involved and is unlikely to go down without a fight.

"It's always a great competition and it's an honour to be invited. Some of the best jockeys in the world are here and it's a great test of yourself. It's probably the best mounts I've drawn in this competition and two of them [Powermax in leg one and Team Sweet in leg two] look to have serious chances."

On which rival he was most keen to beat, Smullen added: "One? I want to beat the 11 of them!"

In the International Jockeys' Championship all 12 jockeys ride in each of the four races – races four, five, seven and eight on the card – with 12 points for a win, six for second and four for third.

Racing UK has announced a non-exclusive deal to show 63 Hong Kong fixtures in HD this season, starting with the International Jockeys' Challenge card. At The Races has already laid out plans to cover racing from Hong Kong, with punters in Britain now able to bet into the massive pari-mutuel pools in the territory.

FIRST PUBLISHED 3:24PM, DEC 6 2016
It's a very tough job to get done but it's always a pleasure to ride in this kind of competition

'Palace Pier had not even run when the race was last staged in 2019' Ryan Moore was 7-2 to be Ballydoyle number one this year - how bonkers was that? Masterful Ryan Moore key to Snowfall's dominant success Classic-bound Joan Of Arc spearheads 210-1 Ballydoyle four-timer Bolshoi Ballet 7-4 favourite for Derby after dominant Derrinstown display Dante day is back where it belongs - and the locals could be loving it