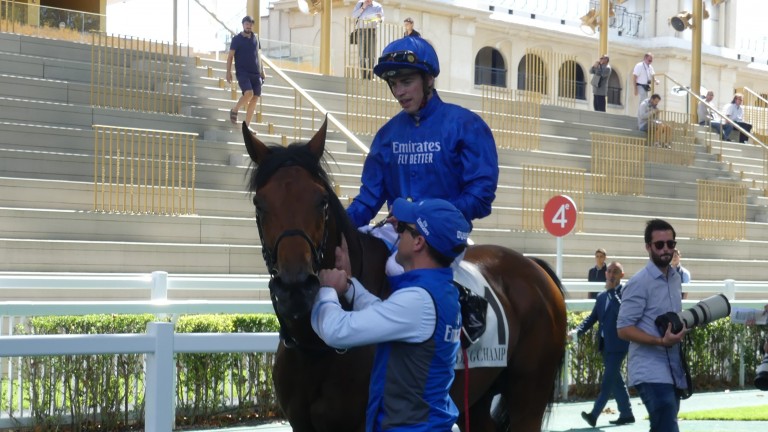 Moonlight Spirit and James Doyle return to the number one spot at Longchamp after an easy success in the Prix de Lutece
Racing Post / Scott Burton
1 of 1
By Scott Burton UPDATED 7:17PM, SEP 1 2019

Charlie Appleby looks to have a stayer of real potential after Moonlight Spirit ran right away from his four rivals to land a bloodless success in the Group 3 Prix de Lutece over 1m7f.

On a day when the Godolphin trainer enjoyed a big-race double at Baden-Baden, the form of his team was amply displayed as Moonlight Spirit burned off his pursuers from the turn in under James Doyle.

Morning quotes for the William Hill St Leger of between 25-1 and 33-1 soon evaporated and, while the sponsors held the line at 20-1, the son of Dubawi was by Sunday evening as short as 16-1 to land the final Classic of the season.

Speaking from Germany, Appleby said: "We were delighted with the victory of Moonlight Spirit. We have always felt that staying distances would bring out the best in him and his break after Royal Ascot has done him the world of good.

"He holds an entry in the St Leger at Doncaster but we also have the Prix Chaudenay back at Longchamp in our minds. We will discuss things over the next week or two but feel that he is a nice staying horse for the future. He is going to be a lovely four-year-old and can hopefully become a contender for the big Cup races."

Doyle was also impressed, while stressing that Moonlight Spirit remains a work in progress.

"He's a horse that we’ve always thought a bit of but he's just a bit clumsy and he showed that again today," said Doyle. "He was quite green out in front, bouncing off the rail and it took a while to get him balanced. But he was different class to them today and you never know, he could build into a Cup horse next year.

With a view to targets later in the autumn, Doyle added: "We know if the ground comes up a bit easier he handles it without any problem." 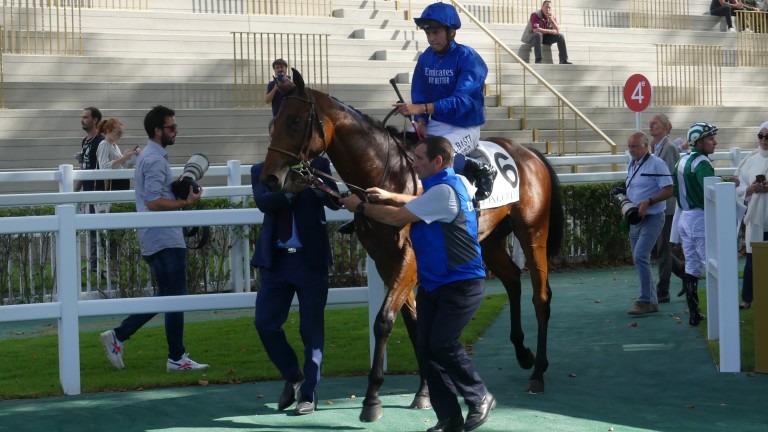 On a fine day for Godolphin, the Andre Fabre-trained Victor Ludorum made a big impression when streaking three and a half lengths clear in the Prix de Fontenoy for debutants, a race with a decent pedigree in recent years.

While it is too early to say whether the son of Shamardal will take up his engagement in the Prix Jean-Luc Lagardere, he clearly has plenty of potential to follow recent Fabre-trained winners of this race, with both Gallante and Waldgeist having gone on to Group 1 success after breaking their maiden in the contest.

"At the start of the year he was working with [Prix Morny winner] Earthlight and showing up well but he hasn't progressed at the same rate and so I think he has benefited mentally from being given more time," said Godolphin's Lisa-Jane Graffard.

Fortune favoured the brave in the equivalent race for debutante fillies, as the Paul Cole-trained Glengowan landed the Prix de la Cascade after connections had spurned the option of starting her career closer to home.

Rossi and Kenway bound for Lagardere

Kenway showed an impressive turn of foot to reel in Wooded and claim success in the Group 3 Prix La Rochette, a race which has produced two recent winners of the Prix Jean-Luc Lagardere in Full Mast and Karakontie. 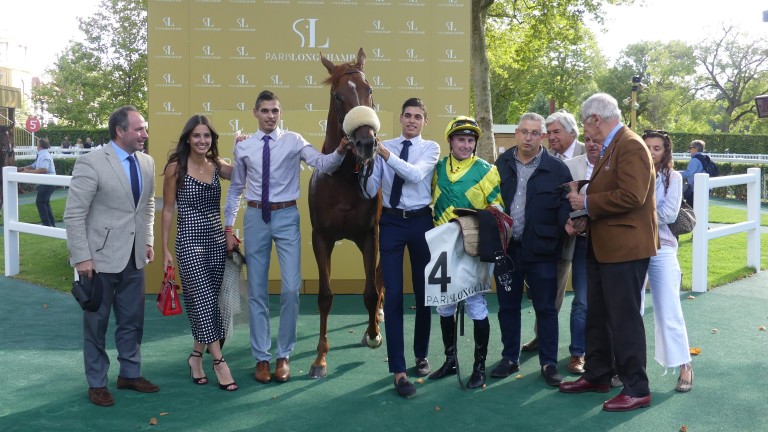 Kenway has been on the go for most of the season and doesn't have the typical profile for the Lagardere, but there was no mistaking his talent as he came from off a blistering pace, in the process providing a first Group winner for his sire Galiway.

"He has run a lot but he's needed that to iron out his immaturity and I think he's a proper horse," said trainer Frederic Rossi. "It was an oversight that he's not entered for the Lagardere but that's where he'll go next."

Soudania made it three wins from four starts when coming wide and late under Aurelien Lemaitre to run down Queen and the James Fanshawe-trained Sweet Promise in the Listed Prix de Liancourt.

"We have no option now but to head into Group company," said trainer Freddy Head. "I expect her to handle softer ground in the autumn although she still needs to prove it. What she does appreciate is having a strong pace to run at."

Sweet Promise was making a big step forward from winning a novice race at Wolverhampton and looks to have plenty of scope to add to this first piece of black type.

FIRST PUBLISHED 6:24PM, SEP 1 2019
He holds an entry in the St Leger at Doncaster but we also have the Prix Chaudenay back at Longchamp in our minds

One trainer, one jockey, one horse and one race to note on Royal Ascot day one 'It's been a great week' - Charlie Appleby's amazing run of success continues 'I like fast things - as well as Adayar I like to partner planes out of Duxford' Charlie Appleby reveals next step for Derby hero Adayar with Arc on the horizon 'I'd work another 15 years as hard as I could to have one more day like that' Size is everything after all as Snowfall and Adayar shoulder their rivals aside