'Unbelievable' Uno Mas out to complete four-timer at Fakenham 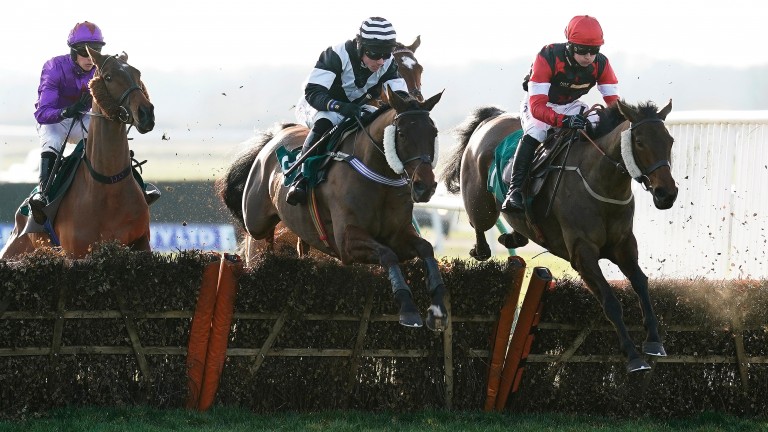 The winner of Fakenham's feature handicap hurdle will receive more than £10,000 and the track has been rewarded with a good field, including the remarkable Uno Mas, who is bidding for a four-timer.

Having won five of his last seven starts over trips ranging from 2m to 3m2f, the Christian Williams-trained five-year-old has rocketed up 22lb in the handicap since November.

Williams, who was quick to praise the prize-money on offer having bypassed an option at Sedgefield on Sunday, said: "He’s unbelievable. He's a great little horse. He won at the track, which is one of the sharpest in the country, over two miles and then at Warwick over three and a quarter miles last time."

Having joined Williams from Paul Power's yard in July last year, Uno Mas was beaten a combined distance of just under 137 lengths in his first three starts for his new trainer, with only three horses behind him.

When asked what has sparked this rampant improvement, the trainer said: “The man who leads him up for me is 71 and even he says he’s never known a horse to stop blowing so quickly after a race as Uno Mas.

"He’s only a pony, but he must just be a really healthy horse with very good lungs. He's got a great will to win."

The Glamorgan-based trainer won't get much sleep between returning from Sedgefield, where he won the feature race on Sunday, and setting off for Fakenham.

"It'll be tough. We'll get home about midnight or 1am and we'll be leaving for Fakenham about 4am," he said.

Neil King was another to compliment the course amid the current debate over prize-money, with the trainer sending Canyon City on the long trip from his base in Wiltshire to Norfolk.

Bryony Frost's mount is in good form, having stayed on to be third in a hotly contested handicap at Kempton last time.

King said: "That was a career-best and he’s been in good heart since. We're stepping up in trip, but I think that will help us and this gives us the opportunity to try it. He’s a bonny horse and he’s been bucking and kicking at home.

"The only time he's really let us down was in the Lanzarote, when I thought he'd run really well, but we don’t know why that was.”

Connections of veteran Sir Mangan hope that sending him back over  hurdles can spark some life into the 11-year-old, who has been disappointing on his last two starts over fences.

Tom Messenger, assistant to trainer Dan Skelton, said: "We're doing it to change something with him and try something new. William [Marshall] rode him last time and said he was going well, but then dropped away.

"He ran well when just touched off at Bangor earlier this season and still has ability, but he's at the stage in his career when it's worth trying something different."

Hugo Palmer has lofty aspirations for Mootasadir, who makes his seasonal reappearance at Wolverhampton and could run in races like the John Porter and Yorkshire Cup before a tilt at the Melbourne Cup.

The colt, who was forced to miss the Dubai World Cup Carnival due to the restrictions following the equine influenza outbreak, has always been held in the highest regard by the Newmarket trainer.

"I love the horse – I loved him from the moment I saw him," he said. "This wasn't the plan and I ended up with a race-fit horse in the middle of February with nowhere to go. I'm delighted with how he's trained and he looks a million dollars.

"He's drawn in stall seven, which isn't ideal, and he has to carry top weight, but I can run him and then ease off him until the summer."

Mootasadir, who is out of South African Grade 1 winner Mahbooba and by Dansili, won the Diamond Stakes at Dundalk on his latest outing, taking his record to four wins from six starts, with those victories all coming on artificial surfaces.

He added: "I'm excited to run him on the turf in the height of summer. I don't think he needs the all-weather – he was pulled up lame at Newmarket and it was very sticky ground before that at Doncaster."

Mootasadir, the mount of Oisin Murphy, will face the 102-rated Amazing Red and the David O'Meara-trained Primero, as well as Kelly's Dino, Cosmelli, Lexington Law, Fearsome and High Language.

Zero Ten, twice a winner at Galway last year, returns to action for the first time since scoring by 15 lengths on his hurdling debut in September.

Emmet Mullins, who trains the six-year-old for Annette Mee, said: "We think Zero Ten is a very nice horse. He picked up an injury after his maiden hurdle win and it's taken time to get him right.

"This looked a suitable race to start him back in and we're hoping he runs well."

Joseph O'Brien is represented by Eviscerating, winner of a handicap hurdle over this trip at Naas on his most recent start, as well as On Call, who finished third in a maiden hurdle at Navan last month.

O'Brien said: "Eviscerating has plenty of experience and we've been happy with him since his Naas win. On Call showed improvement from his first run over hurdles and, while he'll need to improve again, we're happy with him."

The Noel Meade-trained The Caddy Rose is on a hat-trick following wins in a bumper and a maiden hurdle at Punchestown. The trainer said: "She's in good form but she's dropping down six furlongs in trip and that's a bit of a concern."

Also dropping in distance is the Dermot McLoughlin-trained The Echo Boy, who finished second to Cheltenham-bound City Island over 2m3f at Naas last month.

Gordon Elliott is represented by Rakhine State, a short-head winner of a maiden hurdle at Clonmel last month, while the once-raced Big Tree, trained by Tom Mullins, completes the seven-runner line-up.

FIRST PUBLISHED 6:00PM, MAR 3 2019
The man who leads him up for me is 71 and even he says he?s never known a horse to stop blowing so quickly after a race