Friday Action FOUR THINGS TO LOOK OUT FOR 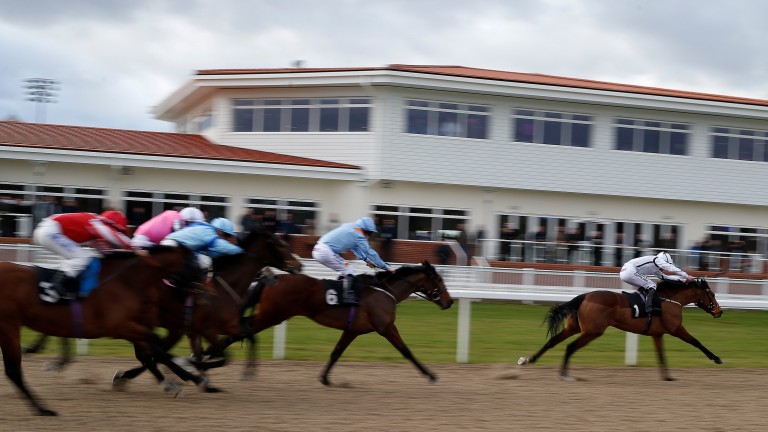 Kempton can again lay claim to race of the day with the latest small but select field for a graduation chase (2.25) likely to provide more Cheltenham Festival clues.

Modus, winner of last year's Lanzarote Hurdle at the track, heads the field with Barry Geraghty over to ride the JP McManus chaser, whose perfect start over fences was spoilt by a fall at Exeter two months ago.

Trainer Paul Nicholls, who won the match race last year with Politologue, said: "We've gone to Kempton looking for better ground – it was heavy at Exeter, which didn't suit him.

"Hopefully he'll have a nice clear run and a confidence-booster on the way to Cheltenham, where he has a number of options."

While King's Socks has the lowest official mark − along with Max Ward − there will be plenty of interest in this French import, whose form has been boosted throughout the season.

Footpad, the odds-on favourite for the Racing Post Arkle, needs no boost to his stellar form but David Pipe's new recruit was second to him in an Auteuil Grade 1 in June 2016 on his last start in France, improving on his previous clash with him when only fifth.

King's Socks, running for the first time since a wind operation and 607 days off the track, can also boast a beating of Optimus Prime, who has rattled up a hat-trick over fences since joining Dan Skelton.

Pipe has picked this graduation starter over a handicap chase at Warwick on Saturday and the Grade 1 Ascot Chase next weekend.

"He's pleasing me at home, has schooled well over hurdles and fences, and I'm very much looking forward to seeing him back on the track," said the trainer.

"The form of his last start in France with Footpad is looking better all the time."

Max Ward won the Cheltenham Festival consolation race that is the Silver Bowl over course and distance last year, while completing the classy field is Overtown Express, third last time to one of the season's most improved chasers Speredek.

Punters will be getting out calculators for the totetrifecta Pick The 1,2,3 Fillies' Conditions Stakes (3.10) at Chelmsford to work out the winner of the latest fast-track qualifier for the all-weather championships finals as the field contains old rivals.

"At the weights she's got a good chance having beaten most of the fillies, being better off with Soul Silver having beaten her," he said.

"One eye is firmly on the final on Good Friday and there are no negatives here – the track should be fine as well as the mile and if there's no pace in the race that isn't a worry as she was a good second over six furlongs at Newbury and has a turn of foot."

Pattie is bidding to be a second qualifier for trainer Mick Channon for the final after Summer Icon's success last month. She trailed in last when Carolinae was second last time but before that beat Soul Silver over seven furlongs at Lingfield when receiving 8lb.

Finishing on a high

They are coming to Chelmsford from far and wide for the last race at 4.45 and first of four Jackpot+ races that the Racehorse Owners' Association and Racing Post sponsor this year.

There is no surprise about that as the £2,000 extra the winner will collect makes it nearly £7,500 for winning a Class 5 race.

The 'plus' race adds £250 travelling expenses, and if the trainer is a ROA member another £500, and the chance to socialise with fellow members who have a hospitality suite even if they do not have a runner.

North Yorkshire-based Marjorie Fife is taking on the roadblock that the A14 can be with two of the eight runners in Samtu, owned by Brian Parren, and Luv U Whatever, owned by her son Tom.

Fife, with 20 horses in training, has not been a regular visitor to Chelmsford, although her horses are used to travelling distances with Scotland providing plenty of the stable's winners.

Tom Fife said: "We don't like running two in the same race but honestly thought with the jackpot initiative there'd be loads of entries and only Samtu would get a run.

"Samtu is a Southwell horse so the track might be a little tight, but they say it's riding soft and slower which is why we're running.

"Luv U Whatever has been very unlucky in recent runs, bumping into well handicapped horses, and last time was affected by the deer running onto the course at Newcastle, losing lengths.

"He's got decent form round there two years ago when winning a Class 2 off a rating of 95. Both have decent chances."

There are three other Jackpot+ races this year at Market Rasen (May 11), Chester (July 13 evening) and Fontwell (October 24).

Political Policy needs no introducing to the Friday night regulars at Dundalk as Gavin Cromwell's battle-hardened seven-year-old has tasted victory on the all-weather track eight times.

After advertising his wellbeing when third in a maiden hurdle recently, he will be bidding to add to his impressive haul at the County Louth track in the feature 2m conditions race (6.00).

In many ways, Political Policy is a victim of his own success and has found winning at the wrong end of the handicap tough recently.

However, Conor Heavey, who rode his first winner on the all-weather for Cromwell last month, will take a valuable 10lb off his back, which should be a great help.

Asbury Boss is another horse who has been running well over hurdles recently and makes his all-weather debut for Tom Cooper and Shane Foley.

Fergal Birrane will be hoping to continue his good run at the track with Rock On Dandy, the mount of Denis Linehan.

The field is completed by Zaofu, Cape Agulhas and Wrap Star.

FIRST PUBLISHED 6:00PM, FEB 8 2018
We don't like running two in the same race but honestly thought with the jackpot initiative there'd be loads of entries