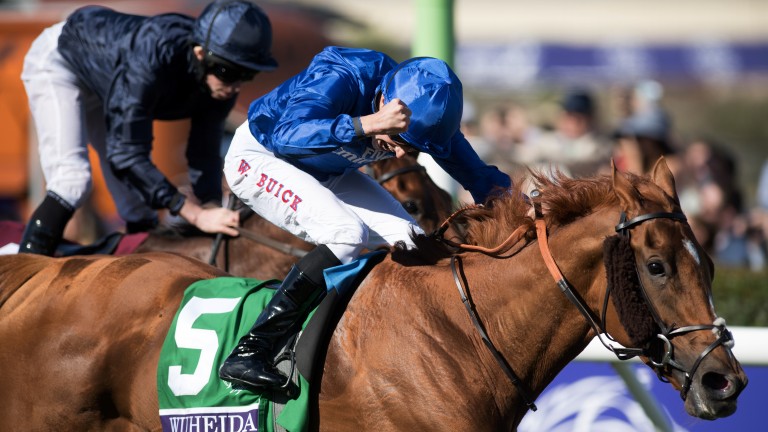 Wuheida, winner of the Breeders' Cup Filly & Mare Turf last season, has been retired following the recurrence of old injuries.

Charlie Appleby's four-year-old looked as good as ever on her seasonal return at Newmarket's Guineas meeting earlier this month when running away with the Group 2 Dahlia Stakes, but it was revealed on Monday it was her final racecourse start.

The trainer said: "It's unfortunate, but she has a few niggling injury worries that have resurfaced in the past few days, and after discussing it with His Highness Sheikh Mohammed we have decided to retire her."

Victorious in four of her eight starts, including another top-level success in the Prix Marcel Boussac as a juvenile, Wuheida will now start a career as a broodmare.

Appleby added: "I am pleased she went out on a high with such an emphatic win at Newmarket. She was a very talented filly on the racecourse. She will go to stud, and Godolphin look forward to seeing her progeny in due course."

There was sad news on Monday concerning impressive Leopardstown maiden winner Contingent, who it was revealed suffered a fatal injury on the gallops.

The Dermot Weld-trained filly was a general 16-1 shot for the Oaks.

Lord Grimthorpe, racing manager for owner Prince Khalid Abdullah, said: "Contingent suffered a catastrophic injury on the gallops on Friday. On multiple veterinary advice we were advised to put her down. Everyone at Juddmonte and Rosewell House are distressed about her loss."

Magnier's Modigliani masterpiece to be auctioned

Amedeo Modigliani’s Nu couche (sur le cote gauche), his masterpiece from 1917 owned by John Magnier, is being auctioned at Sotheby's in New York on Monday.

The work, the largest canvas the artist painted, is the star attraction at the Impressionist & Modern Art Evening Sale at Sotheby's and is estimated to sell for in excess of $150 million – the highest estimate ever attached to a work at auction.

Only three works have ever sold publicly above this level, including Modigliani’s frontal Nu couche (1917-18), which sold for $170.4m (with fees) to Chinese billionaire Liu Yiqian and his wife Wang Wei in 2015.

That marked a huge leap in value for the artist from the previous high of $69m for a Nu couche painting. The latest work to come to market was previously sold at auction in 2003 for $26.9m.

McDonald, one of the rising stars of world racing before the ban, was found guilty of betting A$1,000 (£540) on his own mount Astern. The ban cost him his retainer with Godolphin in Australia.

His big-race wins include the Champions Mile in Hong Kong on Xtension, the Golden Slipper aboard Mossfun and four Group 1 successes with It's A Dundeel.

Derek Christopher, Thoroughbred Breeders' Association member and bloodstock agent, has died after a long battle with cancer. He was 88.

A longstanding member of the TBA, Christopher was TBA regional representative for the east for more than 20 years, organising many successful events.

He served on the TBA’s education and employment committee, and was instrumental in the introduction of NVQs (later apprenticeships) to train young people joining the breeding industry.

He also instigated the TBA’s Stud Staff Award, set up to recognise and reward those working in the industry, and acted as a mentor to many young people at the start of their career.

In 2004 he was the recipient of the TBA’s Dominion Award, made for his significant contribution to the British breeding industry.

Details of a memorial service will be made available in due course.

FIRST PUBLISHED 1:04PM, MAY 13 2018
I am pleased she went out on a high with such an emphatic win at Newmarket