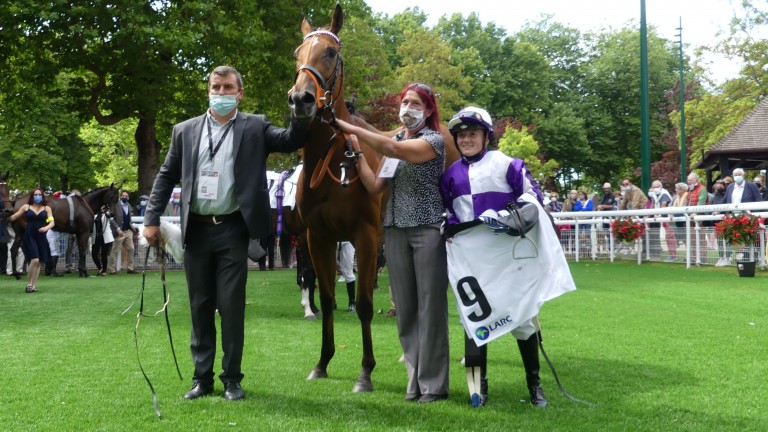 Mo Celita, who has gone from competing in sellers to finishing fourth in the Prix de l'Abbaye this season, heads back to France for the Group 3 Prix de Seine-et-Oise (3.10) at Chantilly on Tuesday.

The progress of the Adrian Nicholls-trained filly has been one of the stories of the Flat season and she will be bidding to end her campaign on a high with Hollie Doyle again in the saddle.

Mo Celita was just run out of third in the Abbaye, won by the Adrian McGuinness-trained A Case Of You, and will attempt to turn around the form with the runner-up Air De Valse over an extra furlong in the 6f contest.

"She was very unlucky not to be Group 1-placed in the Abbaye and there are a few in the race we've faced already," said Nicholls. "She's effective over five but six on easy ground is ideal. We've got another high draw but there's no-one better on a forward-going horse than Hollie and I wouldn't be swapping her for anything.

"She had a Group 1 winner [Glass Slippers] a centimetre in front of her and a Group 2 winner [Suesa] just behind her at Longchamp, so she's got strong form."

Mo Celita joined the Thirsk trainer from Willie McCreery this year and rattled off a five-timer – including three wins in sellers. She was bought by owners David Howden and David Redvers before running well in defeat in Royal Ascot's Palace of Holyroodhouse Stakes.

The daughter of Camacho, whose official rating has risen from 62 to 97, won a Listed race at Deauville to provide her trainer, the former Group 1-winning jockey and son of late trainer David Nicholls, with the biggest success of his second career.

"It's unbelievable to think where we started when we got her and I never thought she'd do what she has, but she's just improved so much and has that will to win," Nicholls said.

"This will be her last run this season and she's done us proud. We're a really small yard and to have her and the big owners that have come in is brilliant. She's going to be a better filly next year as she's improving physically all the time and she's going to be contesting all the big races."

Brad The Brief, winner of the contest last year for trainer Tom Dascombe, and the Richard Fahey-trained Ventura Diamond complete the British contingent in the race, on a card also featuring the Group 3 Prix Miesque (1.25).