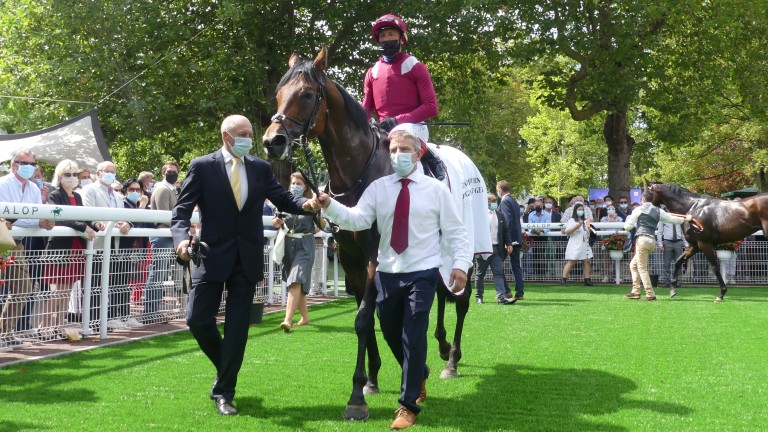 Frankie Dettori and Mishriff return after scoring in the Prix Guillaume d'Ornano at Deauville
Racing Post / Scott Burton
1 of 1
By Scott Burton UPDATED 9:36AM, AUG 16 2020

Mishriff made an eloquent case in far from elegant conditions that he should be considered the best three-year-old colt in Europe over middle-distances as he ran away from The Summit and Victor Ludorum to add the Group 2 Prix Guillaume d'Ornano to his Classic success in the Prix du Jockey Club last month.

The John Gosden-trained son of Make Believe was cut into 12-1 for the Qatar Prix de l'Arc de Triomphe following on the back of an impressive performance under Frankie Dettori, who will have to quarantine for up to 14 days when returning to Britain after his spell in France.

The question now facing Gosden and owner-breeder Prince Faisal will be whether to up Mishriff to 1m4f and pitch him in against history-seeking stablemate Enable at Longchamp, or to take the 'Cracksman route' to the Champion Stakes at Ascot.

"He's going to be entered in all the big races – the Champion Stakes, the Arc, everything," said Dettori. "He's twice proved he's a very good horse. I think he will stay [a mile and a half] and I'm not going to put him off [the Arc].

"At the moment a mile and a quarter is the perfect distance and it's up to the connections and John to decide. He hasn't run that much so there's a possibility he might stay in training and he's done nothing wrong so far."

Dettori has less personal investment in Mishriff avoiding the Arc since Prince Faisal retains David Egan – who missed out here through suspension – though he might breathe a little easier on Enable at Longchamp without such a powerful finisher in his rear-view mirror.

Here the entire field sought something approaching better ground under the outer boundary hedge before the three principals headed for the stands' side rail in the home straight.

"When I walked the course this morning the edge was quicker, but this horse likes soft ground," said Dettori. "He finished the race well in the Jockey Club so at the 600 metres I said come and catch me if you can."

Mishriff showed he handled much faster ground at Chantilly and looks highly adaptable on that score wherever he goes this autumn.

The Summit looks to have run his last race for Alex Pantall before heading to Hong Kong for owners Lily and Marc Chan.

"I am very happy with his run and he was beaten by a better horse on the day," said Pantall. "He showed his courage at the end and seemed to handle being ridden with more restraint."

The Jockey Club 1-2-3 was repeated here as Victor Ludorum again finished behind Mishriff and The Summit having proved something of a handful for Mickael Barzalona early on.

"Victor Ludorum has finished third behind the same horses he chased home in the Prix du Jockey Club and has run very well," said Godolphin's Lisa-Jane Graffard. "It was the heaviest ground he has ever encountered and he was a bit keen early on.

"We were beaten by two very good colts again, but I think we could possibly expect a bit more from Victor Ludorum in different conditions."

FIRST PUBLISHED 1:49PM, AUG 15 2020
At the moment a mile and a quarter is the perfect distance and it's up to the connections and John to decide

Mishriff ruled out of a crack at the Breeders' Cup in favour of Saudi Cup trip John Gosden takes a swipe at BBC 'negativity' in drugs row Fury and frustration but also an abundance of smiles on a vintage Champions Day Next up: key quotes as Mishriff and Adayar head a stunning Champion Stakes Adayar v Mishriff: Graeme Rodway crunches the numbers to reveal who is fastest 'The best year since Frankel' and 'off the charts' - epic Champions Day awaits