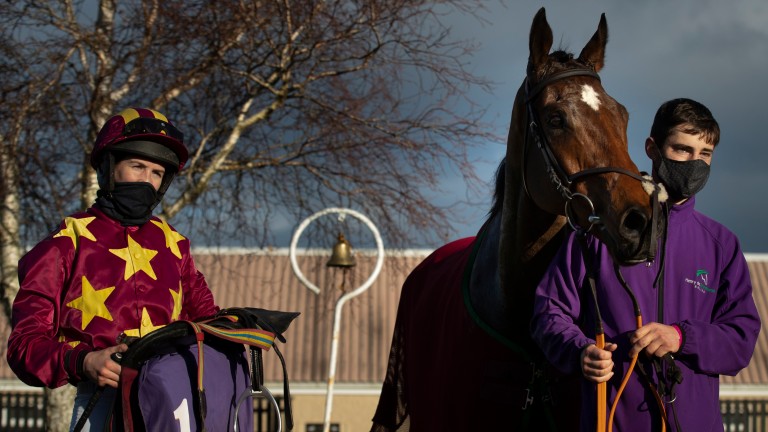 Winner of the Albert Bartlett at the Cheltenham Festival in 2019, Minella Indo is likely to return to the meeting next March, and he is now as short as 8-1 to triumph in the Gold Cup.

For his return, Minella Indo faced just three rivals over 2m7f, and of that trio only Milan Native was able to keep tabs on the odds-on favourite.

However, when Rachael Blackmore let out a bit of rein on Minella Indo, the race was quickly over. Milan Native had no answer and Blackmore was able to cruise home by 25 lengths.

"I'm delighted with him, Rachael gave him a brilliant ride," De Bromhead said. "He looked sharper than a couple of his runs last year. He's needed his previous first runs, although they were over two and a half miles, which he doesn't have the pace for.

"Rachael said he didn't take any major blow, but he is a heavy set horse. I was very fearful about Gordon's [Elliott] horse and giving him weight, so we couldn't have asked for better than what he did."

Another horse who could emerge as a serious contender for the Cheltenham Festival is Andy Dufresne, who made a winning start over fences.

Trained by Gordon Elliott, Andy Dufresne developed into a smart hurdler last season, and looked just as effective on his first start as a chaser, winning by seven and a half lengths.

Paddy Power cut Andy Dufresne to 16-1 (from 33) for the Marsh Novices' Chase.

Elliott said: "I thought he was very professional. Mark [Walsh] thinks a step up to two and a half miles will suit him better. He's a nice horse, he's only going to improve."

It’s probably wrong to get too carried away because both Minella Indo and Andy Dufresne were entitled to win in the manner they did. They went off 8-13 and 1-2 respectively, after all.

Having said that, Minella Indo looked right on his game with a fluent round of jumping and he brushed aside a useful rival, Milan Native, with the minimum of fuss by a wide margin.

Minella Indo looks one of the most exciting chasers coming out of the novice ranks this season and it will be a surprise if he isn’t at Cheltenham in March with leading claims.

Andy Dufresne impressed with his jumping too. He looked particularly slick for a novice having his first outing over fences and is open to plenty of improvement. He has run only six times and has always been considered the type to make a better chaser by Gordon Elliott.

It will be fascinating to see if he can build on this good start and confirm himself a proper prospect for the festival in the coming months.
Analysis by Graeme Rodway