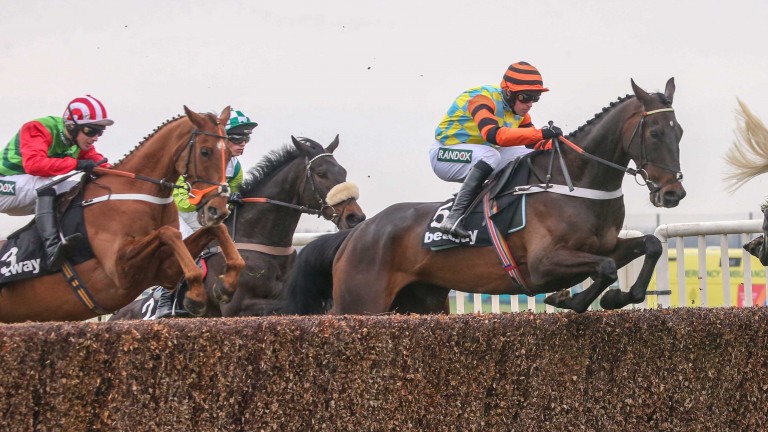 Might Bite: enjoying himself after going back over hurdles
GROSSICK RACING PHOTOGRAPHY
1 of 1
By David Milnes UPDATED 7:03PM, DEC 31 2019

Top-class chaser Might Bite makes his first start over hurdles since April 2016 in a bid to get his head back in front, but he faces no easy task off top weight in a 14-strong line-up.

The classy performer is rated 7lb lower over the hurdles than he is over fences and connections have decided on a change to rekindle the fire that yielded the RSA Chase, King George VI Chase and Betway Bowl in 2017 and 2018.

Might Bite, who was a winner of three of his four outings over hurdles in his younger days, was last seen unseating Nico de Boinville at the fourth fence in a Grade 2 chase at Aintree in December.

Nicky Henderson, trainer of Might Bite said: "We need to get confidence back into Might Bite and we think this is the way to do it. We schooled him over hurdles on Friday and he was like a child with a toy; it was exactly what we wanted to see.

"We need to see that he can do it in a race now, and he's high enough in the handicap even over hurdles, but we just need to get a race into him." 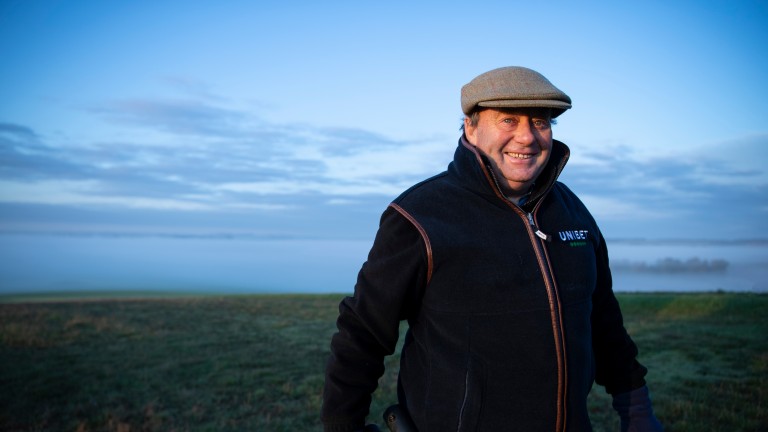 Nicky Henderson: "we just need to get a race into Might Bite"
Edward Whitaker / racingpost.com/photos

Henderson also fields Beware The Bear, who is in the midst of a more conventional campaign.

He added: "Beware The Bear's main objective is the Grand National and this will likely be his last run before that."

Skandiburg looks to have a more regular profile for a race that was won in 2009 by the subsequent World Hurdle legend Big Buck's.

Olly Murphy's hope was just touched off on his seasonal return at Market Rasen, but improved when stepped up to this distance at Aintree in November, when he outstayed Diomede Des Mottes.

Although the form has been let down since, Skandiburg has been put by for this and could be anything.

Murphy said: "It looks a competitive handicap, but he has a nice racing weight on his back and we are very much looking forward to it. This looks the right sort of trip and the ground should be perfect."

Ronan McNallly, trainer of The Jam Man
Might Bite being in there is brilliant as it keeps the weights down. Obviously Might Bite is a very good horse and I wouldn't be writing off Nicky Henderson getting him back, but our lad is only a small horse and I wouldn't want him carrying a big weight. He's in very good form. He's on an upward curve and he'll be my first ever runner at Cheltenham so we're really looking forward to it.

Neil Mulholland, trainer of Shantou Village
We're doing the same as Mr Henderson in switching him from chasing in a bid to get his confidence back. Hopefully this will give him something different to think about.

Richard Hobson, trainer of Who's My Jockey
It's his first start for us and this looks a nice starting point. He's pleased us in what we've seen so far at home and this will tell us a bit more about him.

Richard Newland, trainer of Mason Jar
We're on a fact-finding mission with him as we are stepping him up in trip for the first time. I'm not sure he'll get it, but if he does it will open up new doors.

Henry Daly, trainer of Rapper
As the horse he beat at Market Rasen last time has since won it has meant he has gone up in the weights just for standing in his box. Nevertheless, he should still run well and I expect Cheltenham to suit him better than Market Rasen.

Harry Skelton, rider of Anytime Will Do
He ran nicely at Newbury and has no weight on his back. He seems in good form at home.

FIRST PUBLISHED 6:00PM, DEC 31 2019
We need to get confidence back into Might Bite and we think this is the way to do it