Might Bite bids to make the doubters eat their words 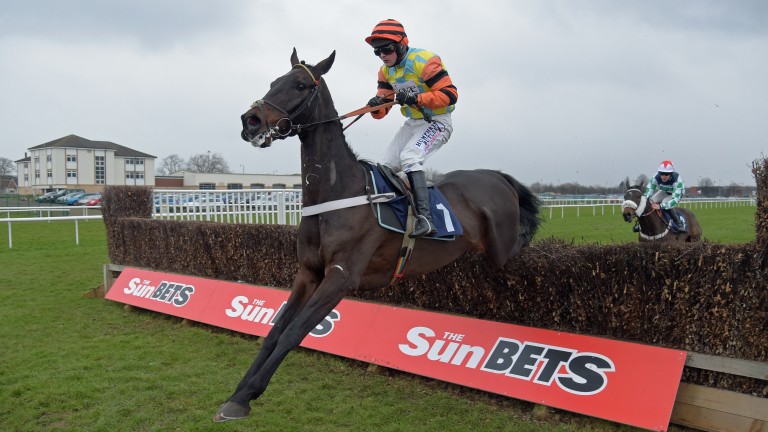 Might Bite might top the RSA Chase market but, according to pundits at festival preview evenings up and down the land, he is among this year's most vulnerable favourites.

The Nicky Henderson-trained runner was frequently nominated as one of the lays of the meeting on the preview circuit, but despite that wave of negativity he remains stubbornly wedded to the top of the betting – and there's plenty in his form to justify it.

The key piece is the Grade 1 Feltham at Kempton on Boxing Day, in which Might Bite took a heavy fall at the last fence when leading 33-1 shot Royal Vacation by the best part of 20 lengths.

That form was given plenty of substance when Royal Vacation, who reopposes here, won impressively in a novice chase at this track the following month.

Might Bite comes into this race on the back of a 30-length win at Doncaster last month, a race that posed little challenge but provided a timely confidence boost after that Kempton fall.

As to his vulnerabilities, front and centre is whether he can be trusted to deliver a foot-sure round of jumping. Might Bite has made mistakes in most of his chase starts, but on the upside his win at Doncaster was smooth as well as decisive. And although he has a win here over hurdles, there is also a suspicion in some quarters that he is better suited by a flat track.

Leading the opposition to Might Bite is Alpha Des Obeaux for Grand National-winning trainer Mouse Morris. Second to Thistlecrack in last year's Stayers' Hurdle, he will be well suited by drying conditions but burst a blood vessel and was pulled up on his last start.

Schooling fall
Willie Mullins, who has four wins in the RSA Chase, saddles Bellshill, who must bounce back from a first-fence fall when schooling at Leopardstown this month.

Age concern
At nine, Whisper is the oldest horse in the race and would become the first runner of that age to win since Miinnehoma in 1992.

Sandra Hughes, trainer of Acapella Bourgeois
Everyone seemed to be taken by surprise by what he did at Navan but I certainly wasn't. He stays strongly and the RSA should bring out the best in him. I think he's improved plenty since Navan. He has a swagger about him now and knows he's the top dog around our place. He's full of confidence and I'm really excited. He doesn't have to make it. If something wants to go faster than him, so be it. He can tuck in, no problem. He really does have a huge stride. Hopefully he'll get into a nice rhythm early.

Mouse Morris, trainer of Alpha Des Obeaux
He was no match for Thistlecrack in the World Hurdle, although he did beat the rest of them a long way. He's in very good form, travelled over well and the ground should be fine for him.

Willie Mullins, trainer of Bellshill
"His performance at Leopardstown on his most recent start plus his schooling fall at the same track would make him hard to fancy, but Ruby has been riding him and schooling him at home and he was more than happy that I declare him, and that is encouraging."

Nicky Henderson, trainer of Might Bite, O O Seven and Whisper
All three are in good form and Might Bite has been doing everything right; he's schooled well and worked well – he's been very good. O O Seven will love the ground and has a chance, while Whisper is in very good order and I'm sure it's the right race for him as I think two and a half miles would be quick enough for him around here. He's in excellent shape and has won twice at Cheltenham this season.

Charlie Longsdon, trainer of Our Kaempfer
I'm looking forward to seeing him run and would give him an each-way chance. Hopefully he'll take his time and jump into it.

Colin Tizzard, trainer of Royal Vacation
He's surprised us because he's really gone through the ranks. Every time we run him he runs better. He's already won at Cheltenham, so we know he likes the track, and he is the sort of horse who can jump off handy.