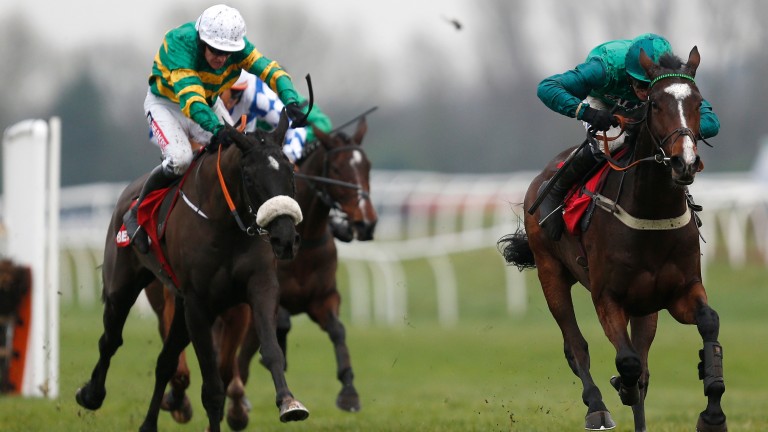 There was plenty of talk of three kings over Christmas, but only one mattered at Newbury on Saturday when Alan King's Challow curse was lifted by the progressive Messire Des Obeaux, who entered calculations for the Neptune Investment Management Novices' Hurdle with an authoritative display.

In beating the well-regarded Baltazar D'Allier by two lengths, Messire Des Obeaux was trimmed to a best-priced 14-1 (from 20 and 25) by William Hill and Betfair Sportsbook for the Neptune.

Messire Des Obeaux, who runs in the colours of Simon Munir and Isaac Souede, has long been held in high in esteem by the in-form King, who was thrilled to add this extended two-mile-four-furlong Grade 1 – landed by the mighty Denman in 2006 – to his CV.

"At last I've won a Challow," said King, whose eight winners since Christmas Day included a four-timer on Boxing Day.

Messire Des Obeaux had won a Grade 2 at Sandown on his previous outing, but success there was no guarantee of following up in the Challow – as the trainer knew all too well.

"I've brought Manyriverstocross, Junior and Label Des Obeaux here after they'd won at Sandown and they were all beaten, so I'm glad we've done it," added King, who thought it likely the Neptune would be the son of Saddler Maker's only festival entry.

He said: "He travelled really well and was making ground at his hurdles. He's very exciting and I've been saying all season I can't wait to see him over a fence and he's got chaser written all over him, but he's not doing bad over hurdles.

"I think we'll go to Cheltenham at the end of January for the Neptune trial and see no reason to go up in trip to three miles, although he would get it. He handles soft ground, but it doesn't have to be."

Daryl Jacob, the owners' retained rider, did the steering and said: "He's a nice type and is getting better all the time. He's a good, strong traveller and that's exactly what you need for a Cheltenham horse. We've plenty of of exciting horses but he's doing very well."

FIRST PUBLISHED 12:03PM, JAN 2 2017
The 100-30 second favourite was always travelling strongly and won with a degree of authority