Mental pressures on jockeys are enough without social media abuse

Kate Tracey, partner of Ciaran Gethings, on the reaction to the jockey's unseat at Hereford last week 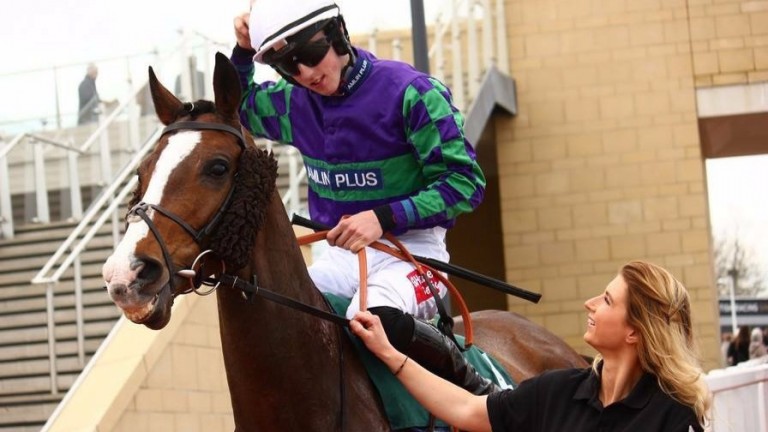 It has long been accepted that sports people are in the public eye and therefore must expect to hear the public's opinions. It is presumed they will accept these opinions, whether they be positive or negative, and not retaliate even though in many cases they are just doing their job.

Last week I experienced the backlash of sports fan abuse. In recent days my boyfriend, Ciaran Gethings, has been the focus of a lot of online attention following an unseat in a race at Hereford last Wednesday, which I'm sure many Racing Post readers will have seen on Facebook or Twitter.

There was much discussion over the unseat. Many people claimed Ciaran had deliberately jumped off Deckers Delight in an attempt to hustle some sort of gamble, while others defended him against the onslaught.

However, the effects of the online debate went far beyond just a social media page, and I want to tell the full story of both the incident and the repercussions of the internet trolling.

Ciaran is a 22-year-old 5lb claimer from Wicklow, Ireland. He has worked for Philip Hobbs for the past six years, where he has progressed through the ranks, learning his trade from the very bottom. I thought it important to give some background information about him as it becomes hard to see these jockeys as real people with a real background sometimes.

Ciaran has worked for everything he has achieved in his racing career. He comes from a humble, understated family who instilled those values in him.

Above all, though, he is a great talent. He won the Swinton Hurdle with his first ride as a conditional jockey and has ridden 45 winners, the majority of which were not on fancied horses.

In the incident in question Ciaran, riding the 25-1 shot Deckers Delight, trained by Nigel Hawke, was in contention with the favourites when she stepped at the third from home. Ciaran was unshipped from the saddle to the left side of the horse and saved himself by swinging his leg back over the saddle.

The camera angle appears to show Ciaran regaining his original seat and starting to push the mare once again, when in fact he hadn't at all. He struggled to get both stirrups back while simultaneously being bumped around the saddle. When he couldn't control the final bump, gravity took him over the edge.

Any rider of horses will probably be familiar with this feeling, knowing that once gravity takes hold the rider rarely wins.

The racecourse stewards did not question the incident, and neither did the BHA. The unseat was merely a racing incident, perfectly innocent and just part and parcel of the sport sometimes. The most important outcome of the incident was that both horse and jockey were unharmed.

Ciaran was obviously annoyed with the unseat due to how well the mare was travelling at the time. However, by the time he got home he did not give the incident a second thought. This was until the social media backlash began.

Twitter messages, Facebook messages and Facebook pages sharing a video of the unseat all started bombarding his phone. Threats, expletives, abuse and general torment in huge volumes began plaguing him.

Soon it became overwhelming, with Ciaran having no choice but to delete his Twitter account and block many sites on his Facebook. The sheer level of spite shocked even this hardened jockey.

Ciaran described the feeling as though "the spotlight of the world was on me", and "all I felt was hate and fear for what might happen as a result of the attention".

Being a young jockey, his reputation is everything to him. Any scrutiny could be catastrophically damaging.

Mental health has been a big talking point recently in the racing world, jockeys being the flagbearers of the subject. The mental demands racing imposes on jockeys are excruciating.

The level of competition for rides between jockeys is a never-ending battle, the pressure to give every horse the perfect ride is huge and the fear of bad publicity is always there. Jockeys have to waste and sweat on a daily basis just to ride, which is both mentally and physically demanding.

They have to drive huge distances each day from course to course, with no expenses paid for. The life of a jockey is far from glamorous; it is relentless, with racing taking place almost every day of the year.
It really is no wonder there is such a widespread issue of jockeys with mental health disorders. The battle to remain mentally stable for these jockeys is made only harder by online abuse, something that is far too common in the modern game.

I would love people to remember the old, childhood message of 'think before you speak'. All too often it becomes easy to let emotion dominate a punter's mind and rational thought to be banished.

Once in a reactive state of mind a person can forget that the subject of their anger is still a human being, a human being who is just trying to do a job and make a success of themselves, just like anyone else in this world.

I urge people to not just jump on their laptops or phones to try to vent their anger without first thinking about the consequences of their actions. It sounds simple and almost like a lesson learned from primary school, but I believe the message needs reiterating sometimes to adults as well.

The mental torment and distress these trolling incidents cause goes beyond just venting some frustration.

I am a rational person and know that there will always be critics out there ready to inform sports people of their opinions. However, I hope that with more acknowledgement of internet trolling, accompanied with a greater awareness of mental health issues within sport, the negativity may lessen.

We should be praising the talent these brave people possess and celebrating it. Maybe then the bigger issues of mental disorders might diminish.