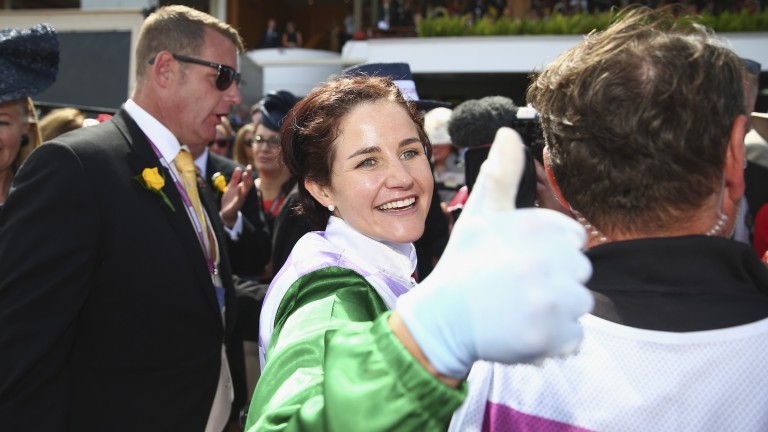 Melbourne Cup-winning jockey Michelle Payne has been found a horse to ride at Royal Ascot following the purchase from Italy of Group 2 winner Kaspersky to join the Newmarket stable of her friend Jane Chapple-Hyam.

Payne, who made history when becoming the first female rider to win Australia's most famous race on Prince Of Penzance in 2015, plans to visit Britain this summer to ride at the Royal meeting and Shergar Cup, having previously ridden in Britain in 2009.

Six-year-old Kaspersky, who has won eight of his 14 starts including a Group 2 in Germany last summer and is Group 1 placed, will be prepared for the Queen Anne Stakes and eventually continue his career in Australia, where he will be trained by Payne.

Chapple-Hyam said: "Michelle and I keep in contact. I was really looking for a Melbourne Cup horse but they're too expensive for our clients so I suggested to Michelle going for an Emirates Stakes [formerly the Mackinnon] horse.

"I purchased Kaspersky last Tuesday and he arrived on Saturday. I'll run him a few times over here and try to get him into the Emirates Stakes, and then he'll remain in Australia to be trained by Michelle. It's good for Michelle to get a nice European Group horse in the barn and hopefully we can do it again."

Kaspersky, who has been bought for retired Australian businessman Ernest Clarke and his wife Ronda, is set to start his campaign in a Listed race at Ascot on May 3.

"We know he's going to be a 50-1 shot in the Queen Anne," the trainer said. "He's going to be taking on Group 1 horses and then you'll have a few floaters like him that are Group 2 horses.

"He's a lovely colt and I think is a horse who can handle summer conditions, which is important when you go down to Flemington. We're going to have fun at Ascot and I'd love it if he runs well."

Payne, 31, who has combined riding with training since October last year, told the Herald Sun: "It’s an unbelievable opportunity. I’m looking forward to both riding and training the horse. To think I might be riding at Royal Ascot is incredible.’’

The BHA confirmed the rules would allow Payne, as a licensed trainer as well as jockey, to ride in the Queen Anne unless she was riding against one of her own horses.

FIRST PUBLISHED 3:54PM, MAR 28 2017
It's good for Michelle to get a nice European Group horse in the barn and hopefully we can do it again