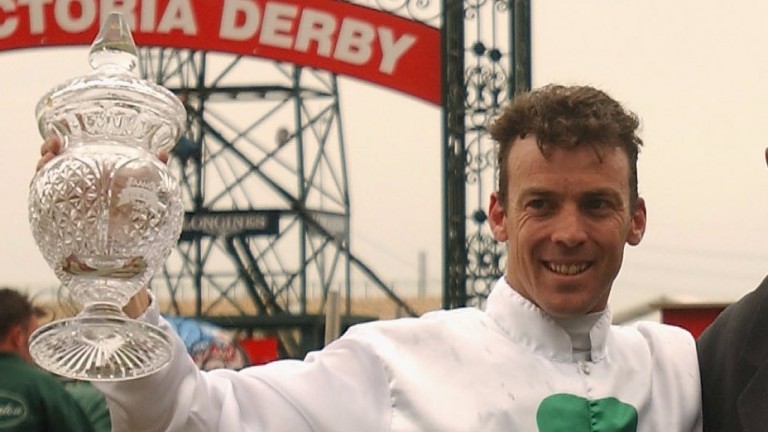 Steven King, pictured after winning the 2002 Victoria Derby, has announced his retirement
Nick Laham
1 of 1
By Keith Melrose 11:34AM, AUG 2 2017

Australian jockey Steven King, who won the 1991 Melbourne Cup on Let's Elope in the early years of a career that enjoyed prolonged success, has officially announced his retirement from the saddle.

King won well over a dozen Group 1s during his career, including the Caulfield Cup-Melbourne Cup-Mackinnon Stakes treble on Let's Elope. He also won the Cox Plate, Victoria Derby, Caulfield Guineas and VRC Oaks, as well as a pair of Group 2s on three-time Melbourne Cup winner Makybe Diva.

King had not ridden in a race since December, but with the emergence of his son Lachlan as a top young rider in Australia he decided to draw a veil over his own time in the saddle.

He told The Informant: "Lachie's going really good, but he's still got a long way to go yet. He's doing everything right and listening to advice."

He added: "Maybe one day we'll team up and I'll train a winner for him. That would be a huge thrill."

King has expressed a desire to take out a training licence one day, but for now is working with Lloyd Williams, whose colours have been carried to five Melbourne Cups.

"I'm up here with Lloyd in a transition phase," King said. "I'm giving myself the chance to have some thinking time while at the same time doing something that I love doing. I'm riding quality horses targeting the main races, which is really exciting."

King visited Britain to ride in 2006, finishing down the field in both the King's Stand and what was then the Golden Jubilee aboard Glamour Puss.

FIRST PUBLISHED 10:09AM, AUG 2 2017
I'm giving myself the chance to have some thinking time, while at the same time doing something that I love doing