Fortune slashed for Triumph after putting Bapaume in his place 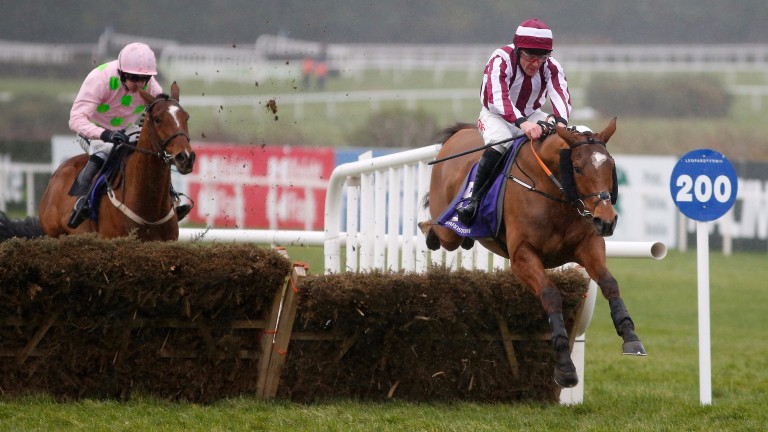 Mega Fortune was ridden more positively, wore cheekpieces for the first time and finally got some soft ground. All those factors combined to produce his best performance over hurdles.

This was a different Mega Fortune to the one we witnessed take third behind Bapaume in the Knight Frank Juvenile Hurdle over Christmas. He was much slicker over his hurdles and the application of cheekpieces helped ensure he did not hit a flat spot this time.

“We knew with a bit of ease in the ground and the cheekpieces it was going to be a different story,” said trainer Gordon Elliott.

“We said we were going to make plenty of use of him and make them work. Thankfully it worked out great. We’ll go to the Triumph Hurdle now, that’s the plan."

Elliott is convinced that the stiff test the Triumph Hurdle provides will be to the advantage of Mega Fortune.

“Cheltenham will suit him," the trainer continued. "He's proven he can go on a bit of nicer ground and we know he stays – you have to stay to win a Triumph Hurdle.

"The cheekpieces made a big difference. You can see there he was travelling the whole way, whereas the last couple of runs he was behind the bridle.”

Davy Russell's shrewd ride was one of the key factors in the success, and he also believes Mega Fortune is right in the Triumph Hurdle mix.

“He’s strengthening up into a nice horse,” Russell said. “The ground here at Leopardstown has been good for the last few meetings and the softer conditions helped.

"The cheekpieces also helped, although he still idled plenty in front and kept plenty to himself. The outside track [New course] at Cheltenham for the Triumph should suit and he should get the good, strong end-to-end gallop there that he needs.”

The winning distance was three and a half lengths, with Bapaume a further seven lengths ahead of third-placed Dinaria Des Obeaux.

FIRST PUBLISHED 2:47PM, FEB 12 2017
We knew with a bit of ease in the ground and the cheekpieces it was going to be a different story