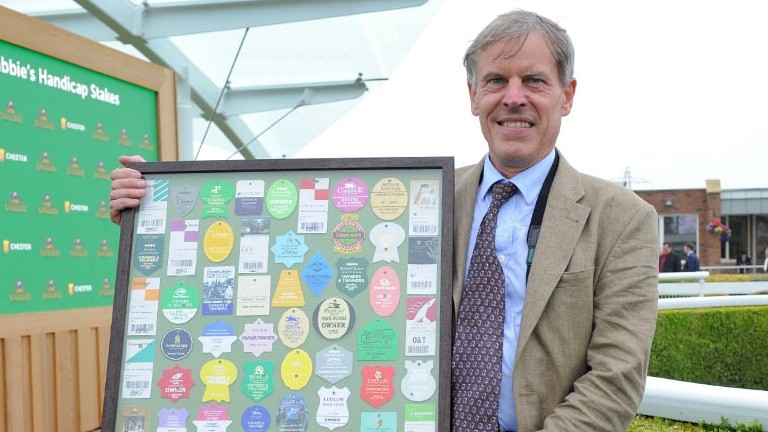 Proud owner David Henery at Chester, showing off the evidence of his appearances with runners at Britain's 61 other courses
ALAN WRIGHT
1 of 1
By David Carr 4:03PM, JUN 11 2017

Forget Godolphin and Coolmore. Stand aside Gigginstown and JP McManus. This is what owning racehorses is really all about.

He'll never be champion owner but David Henery achieved something that could well be unique when Red Tycoon carried his colours into seventh place in the 6f handicap at Chester on Saturday.

Although he left with no prize-money, he earned a probable place in the history books as it meant he'd had a runner at every one of the 62 courses in Britain, Flat and jumps, including the currently closed Folkestone and both of Newmarket's tracks.

And he has been there and got the the owner's badges, travelling from his Hampshire base to Plumpton, Pontefract, Perth and the rest in the past 13 years.

"There's no point owning a horse if you're not going to go," he says.

Like many great ventures this one began in the pub, as Henery, 61, and a few friends first hatched the idea of buying a horse in 2004.

But like many ventures launched in such a venue, it was not an immediate success. Bricketstown King and then Tudor Oak ran 29 times between them without winning and the partnership folded in 2008.

However, Henery returned to ownership after the sale of his half of a company that sold industrial automation software four years later.

And he had a right royal result with Plumpton winner Superciliary – a horse bred and previously owned by the Prince of Wales and the Duchess of Cornwall.

"I had a misspent youth and I learned the hard way that the more you gamble the more you lose. I have £20 or £30 for an interest but I'm not going to try to make money out of punting."

Chester was a challenge

There have been another 17 victories since and Henery has been trying to complete his full house for a while.

"I'm a bit of a 'Statto', I've got a spreadsheet with every runner, and I worked out that after going to Perth and Musselburgh last year that I had only Chester left," he says.

"I tried three times to have a runner there but couldn't get into a race, so I went to Newmarket and bought Red Tycoon."

The 13,000gns price tag was just the latest significant outlay in what has been an expensive hobby.

Henery says: "You can end up going a long way, picking up a bill for nearly a grand for the transport and coming back without even a bit of prize-money - it's great that at Chester you now get £500 whatever happens.

"But at the end of the day it's been great fun. It's a fantastic day out and if you invite a few friends along, so much the better. It has cost a lot of money but I'm in the fortunate position that I can afford to spend a bit on it." 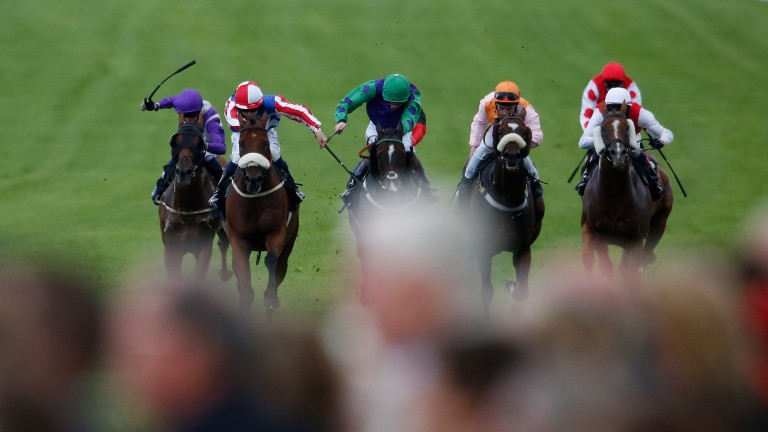 Pettochside (second from left, red and white sleeves) wins for David Henery at Goodwood, his favourite course, in 2015
Alan Crowhurst

Closer to home is better, and Henery says: "Goodwood is the best track in the country, principally because you can see the races. The view is fantastic − at some places it's hard to see the racing and you end up looking at the screen. I hate that as you can sit in a betting shop and watch the screen."

There will be no sitting around for Henery, whose new quest is to have a win or place with one his horses at every track – he's managed 31 of the 62 so far.

And he's hopeful Red Tycoon can play his part, saying: "We missed the break a bit at Chester and gaps just never opened for him - a straight course will be better for him."

FIRST PUBLISHED 1:49PM, JUN 11 2017
I've got a spreadsheet with every runner and I worked out that after going to Perth and Musselburgh last year I had only Chester left