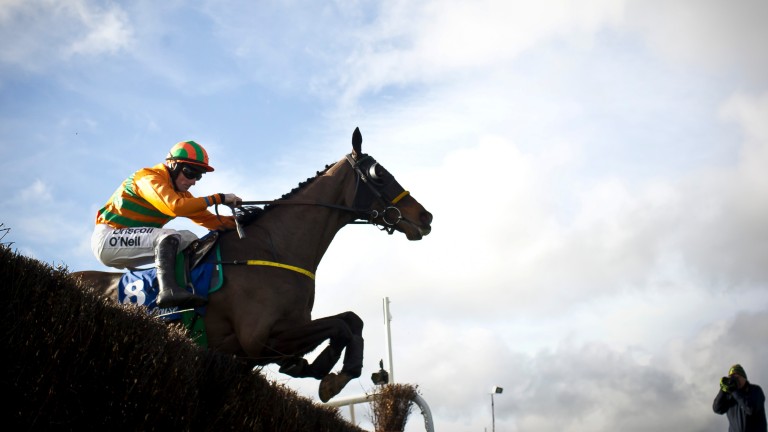 Texas Jack heads the weights for this event for older horses with trainer Noel Meade hoping the 11-year-old can follow up his win over the same trip at Fairyhouse early last month.

That six-length victory was Texas Jack's first for over three years. A dual chase winner at Grade 2 level in his younger days, he was raised 5lb for his Fairyhouse success, and speaking yesterday Meade said: "Twelve stone is a lot of weight, but we decided it was a better plan to run him in this pensioners race rather than wait for the Leinster National at Naas next Sunday.

"He's in good form and loves testing ground and, believe me, it will be very testing tomorrow."

Texas Jack's five rivals include the Leonard Whitmore-trained Kilford, whose two course and distance wins last season included this event in which the 11-year-old made all for a 27-length win under Luke Dempsey, who is again on board.

Whitmore said yesterday: "I'd love to think he could repeat his performance in the race last year. He loves Navan, but he's a year older and hasn't been in the same sort of form in his two races this season.

"He was rated 112 when he won the race 12 months ago and went up to 133 after his second course and distance win. He's down to 125 tomorrow but I'm only hopeful about his chance."

Folsom Blue, whose only chase win was in the 3m4f Grand National Trial at Punchestown three years ago, represents Mouse Morris, while four-time chase winner Canaly runs for Sandra Hughes.

Completing the line-up is the Dermot McLoughlin-trained Some Drama and the Peter Maher-trained Mtada Supreme, whose three wins over fences include a cross-country chase at last year's Punchestown festival.

FIRST PUBLISHED 6:00PM, MAR 3 2017
He's in good form and loves testing ground and, believe me, it will be very testing