McManus runs three in his bid for the hat-trick 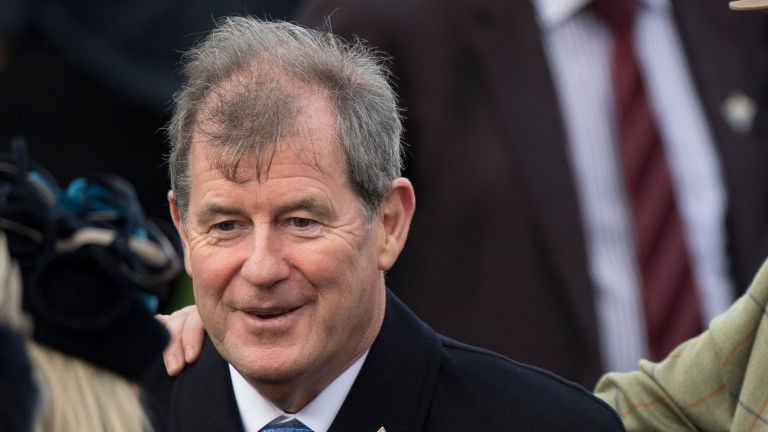 JP McManus: the legendary owner has a strong hand in the Kilbeggan feature
Edward Whitaker
1 of 1
By Brian Sheerin 6:00PM, JUN 3 2017

A typically competitive handicap chase in which legendary owner JP McManus will be bidding to win his third renewal on the bounce and he is represented by Hard To Call, The Gatechecker and Rock On Fruity.

On jockey bookings alone, it would seem that Michael Hourigan’s The Gatechecker - the mount of Mark Walsh - would by the number-one hope.

There were plenty of positives to take from the effort of the Charles Byrnes-trained Rock On Fruity in defeat at this track last time and he should have strong claims, so too McManus’s third string Hard To Call.

Noel Meade’s stable have been going particularly well of late and Thomond is one that should prove popular with punters again. In the first-time cheekpieces the Patricia Hunt-owned gelding flew home at Roscommon and was only narrowly denied in second. The headgear stays on as he bids to land his first victory in almost 1,000 days.

There are plenty of first-timers tackling this handicap chase. Both Windy Millie and Phil's Magic have their first start in a pair of blinkers, while the Gordon Elliott-trained Hard To Call makes his handicap chase debut.

Michael Hourigan, trainer of The Gatechecker
He has a lot of weight but we will keep our fingers crossed. He was staying on well at Leopardstown when he unseated, but, sure, the fences there would be a lot bigger than Kilbeggan. Hopefully he can go close as I bought a few cattle yesterday and he would help pay for them!

Seamus Neville, trainer of Cahirconree
He has been in very good form since winning decisively at Tipperary, and on that basis, we're hoping he goes well again. We actually thought that the trip at Tipperary would be a bit sharp for him but he proved us wrong. He’s stepping up in distance in this, but he has reasonably good point-to-point form so we are hopeful.

Charles Byrnes, trainer of Rock On Fruity
There was a bit of promise about his last run at the track but he has been bitterly disappointing on the whole. It's his first time stepping up to this trip but he has won his point-to-point in the past so I'm hopeful he will stay.

Peter Maher, trainer of Tom Horn and Mtada Supreme
Is it one race too many for Mtada Supreme? I don't know, but he always peaks in the spring and his form seems to taper off after that. Look, he will probably make a fool of me now and go and hack up but I think he is probably just an each-way hope. It's a bit of a fact-finding mission with Tom Horn. He was a good horse in his day and he didn't cost a lot of money which is why we bought him as we think we can get a day out of him. That day might be over banks, though.

Paul Flynn, trainer of Windy Millie
She has been unlucky with injuries but she is in a good place now. Davy [Russell] has won on her before so they are a good combination. I think she will improve for the run.