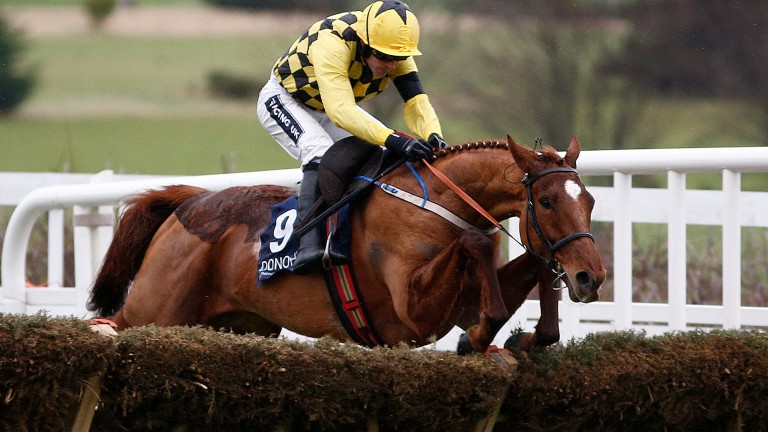 The Cheltenham Festival looks set to kick off with a supreme Supreme Novices' Hurdle in which the relatively low-profile Willie Mullins-trained favourite Melon could face big-name rivals including Moon Racer, Finian's Oscar and Neon Wolf.

To provide extra spice, all seven of JP McManus's Triumph entries are also in the Sky Bet-backed contest.

Entries were unveiled on Thursday for the festival novice hurdles, and there are 19 more contenders for the Supreme than at this point last year, when the Mullins-trained Min was hurtling towards the race as the latest hype horse after stablemates Douvan and Vautour.

Moon Racer is also in the Stan James Champion Hurdle, but while trainer David Pipe conceded that contest is starting to fall apart, he also said: "It might need to fall apart a bit more for him to come into the reckoning."

He added: "Moon Racer galloped this morning and is in good form after his mid-season break. We' are just getting him back to fitness, but whether he'll run before Cheltenham I don't know. If he doesn't he's already got the experience to go straight there, although he would have a racecourse gallop somewhere."

Colin Tizzard has now identified a pre-festival target for the unbeaten Finian's Oscar, revealing: "He's probably going to run first at Exeter a week on Sunday in a £20,000 novice over two miles. We do think he's more of a two-and-a-half-miler but aren't going to pigeonhole him. The Tolworth was two miles and we're going to keep our options open."

Harry Fry's Neon Wolf is also unbeaten and, like Finian's Oscar would, in the presence of a strong Supreme favourite like Douvan, almost certainly be heading towards the Neptune. However, the open-looking Supreme was confirmed as under consideration for the six-year-old, whom Fry describes as "hugely exciting".

Sky Bet are top price at 4-1 about maiden hurdle winner Melon, but no fewer than five other horses are also single figures with the firm.

Spokesman Michael Shinners, who is "thrilled" with the strength of the entry and believes we could be in for a surprise, said: "This is our fourth year sponsoring the Supreme and it has a different look this time.

"In the past we've had Vautour, Douvan and Min heading the market, but there isn't one like that with strong Graded form this time and I think Melon is where he is in the betting mainly because punters have been waiting for a Mullins horse to emerge. I wouldn't be surprised if we were in for a shock."

Shinners has plenty of respect for Charli Parcs, one of the seven juveniles in the race owned by McManus, and for Moon Racer, who was favourite in most lists until Melon's emergence.

He added: "We saw good money for Charli Parcs before he was a Pricewise selection and we're still seeing it now. I'm also interested in Moon Racer and his plans."

As McManus has four of the top seven in the betting for the Triumph, he seems certain to allow at least one of his entries to have a pop at older horses in the Supreme, and the owner is 4-1 with Ladbrokes to win the festival opener.

His Defi Du Seuil enhanced his Triumph claims at Cheltenham last Saturday, where the late withdrawal of Charli Parcs, who heads to Musselburgh at the weekend, simplified his task. McManus also has Bhutan, Housesofparliament, Landofhopeandglory, Sword Fighter and recent purchase Project Bluebook entered in both races.

Demand for festival tickets is as strong as ever, and the Best Mate Enclosure, on the far side of the racecourse, is now sold out on Gold Cup day.

FIRST PUBLISHED 1:04PM, FEB 2 2017
We do think he's more of a two-and-a-half-miler but aren't going to pigeonhole him. The Tolworth was two miles and we're going to keep our options open