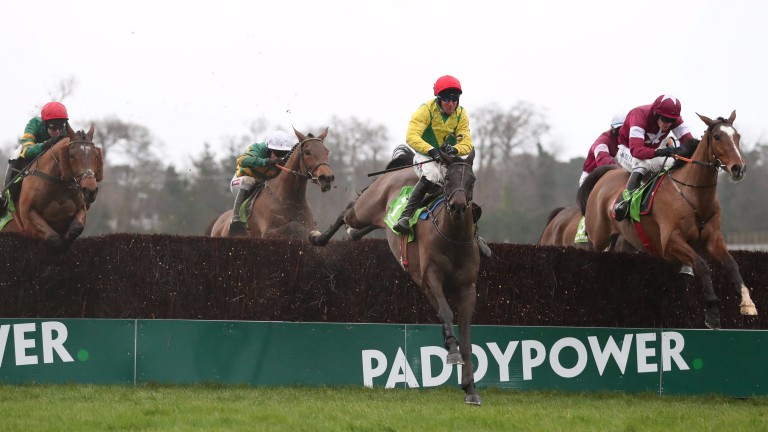 More Of That was beginning to get motoring just before coming to grief at the last fence
Patrick McCann
1 of 1
By Brian Sheerin 11:26AM, FEB 14 2017

JP McManus’s racing manager Frank Berry has revealed that Irish Gold Cup casualties More Of That and Minella Rocco are likely to take their chance at Cheltenham in the Timico Gold Cup, but nothing is set in stone for Carlingford Lough, who has no Cheltenham entries but could be aimed at the Randox Health Grand National depending on how he has come out of Sunday’s race.

More Of That, the only horse to have beaten Annie Power when she has stood up, seemed to be delivering a strong challenge when coming to grief at the final fence at Leopardstown and despite the crashing fall, Berry believes there are a lot of positives to take from the performance.

He said: “I thought More Of That travelled well and jumped well up until the last fence, obviously. Mark [Walsh] was very happy with him and they were in the process of running a big race. Where they would have finished is debatable but you would have to have been pleased with him.

“We will have a look at the Gold Cup for him now. It looked like he was running a big race but whether it was a strong enough run to say he is up to Gold Cup standard is another question.”

Minella Rocco never got involved in the race, unseating Aidan Coleman after making a mistake at the sixth fence, and Berry said: “Minella Rocco made a stupid mistake and landed on top of the fence down the back straight. I'd say it will be tight whether or not we'd be able to get a run into him before the Gold Cup, especially after travelling over and back from Britain to run at Leopardstown but we will see."

If lining up in the Gold Cup Minella Rocco is likely to face Sunday’s conqueror Sizing John who was been given the green light for participation in the big one by Jessica Harrington on Monday morning.

Carlingford Lough could only manage fourth as he tried to win his third successive Irish Gold Cup, but Cheltenham will not be on the agenda for him next month as connections consider a tilt at the Aintree Grand National instead.

Berry added: “Carlingford Lough ran a very good race as well. He just seemed to get outpaced at the wrong time but he came home strong and I would imagine the Aintree National will come under consideration but there is nothing set in stone with him just yet.”

Cromwell said: “She's in great form at home and the plan is to go straight to Cheltenham with her. We could give her a racecourse gallop before the festival, somewhere like Leopardstown may be ideal.”

FIRST PUBLISHED 11:26AM, FEB 14 2017
It looked like he was running a big race but whether it was a strong enough run to say he is up to Gold Cup standard is another question