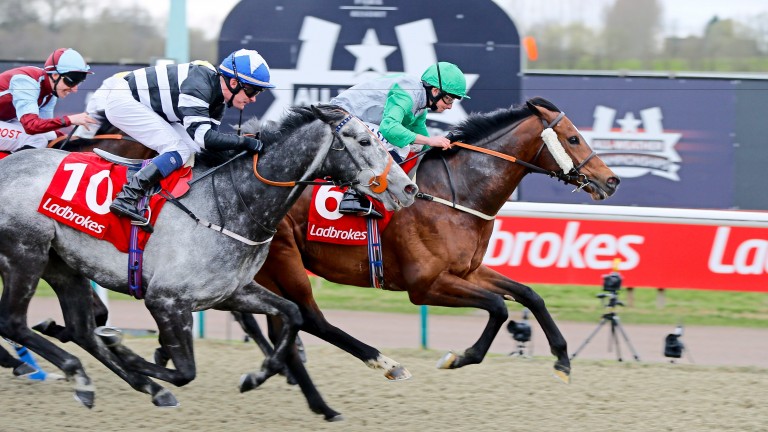 Marco Botti stalwart Grey Mirage bids for a first win since his mile success at the 2015 Good Friday championships when he carries top weight in this handicap.

The seven-year-old has become hard to win with, but is finding his level again and was a good third to My Target in what looked a stronger race than this over a mile here last time, and Martin Harley is back in the saddle for the first time in nearly 11 months.

Harley, who knows Grey Mirage better than anyone, rode David O'Meara's He's No Saint, possibly the main danger, when he was second at Chelmsford last time. However, stable jockey Danny Tudhope is back on board.

Most of these are all-weather regulars, but Joey's Destiny and Gallipoli will be trying an artificial surface for the first time.

The last two winners of this race have gone on to rate much higher, Bint Dandy scoring off 74 and rising to 91, and Certificate winning from 90 before rocketing to a heady 110.

Marco Botti, trainer of Grey Mirage
My impression is he's a little better at a mile than 7f nowadays. I wish he had a better draw, but it's not a big field. He handles the track well and I was happy with his first run after a break last time. He seems in great form and should have a squeak.

George Margarson, trainer of Shyron
This trip around Lingfield is what suits him best and his last win was off the same mark. He's in great form at home and if they go a good pace we're expecting a big run.

George Baker, trainer of Joey's Destiny
He's talented on his day and has a decent draw. We didn't have a clear run with him on turf this year, which is why we are persevering on the all-weather. He's never raced on it before, but works on a similar surface, so there's no reason why he won't handle it. If he replicates his home work he won't be far away.

Phil McEntee, trainer of Pearl Spectre
He got slightly unbalanced coming out of the stalls last time and got shuffled back very quickly. It was nothing to do with the double penalty and you can put a line through it. I'm happy enough with his mark and 7f round Lingfield should be right up his street.

Simon Dow, trainer of Presumido.
He's run well on his last two outings. Last time he wasn't quite able to get to the leaders, but wasn't beaten far. He's come out of the race in good form and is ready to run again.