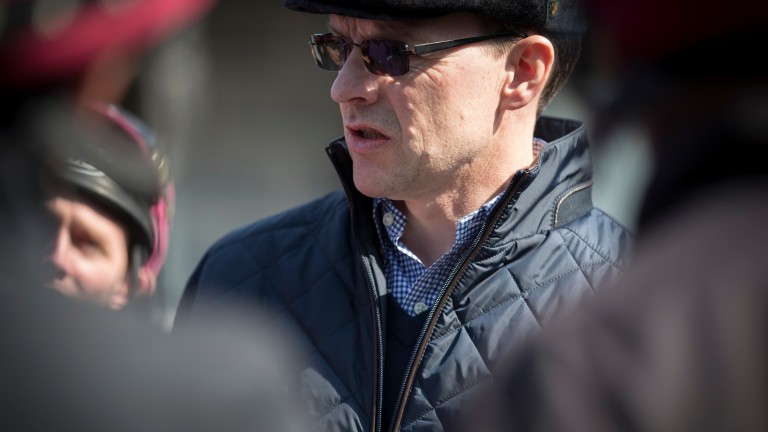 Aidan O'Brien: has four runners putting their Derby credentials on the line in the Chester Vase
Patrick McCann
1 of 1
By David Carr 9:21AM, MAY 11 2017

Right then, it's time to put the champagne away. Forget about last week's celebrations and look to the future.

Those wins were exciting and might make everyone think you are unbeatable but you know that it's all still to play for and the big day next month is the one that really counts.

That is the message that Theresa May and Aidan O'Brien will both be hammering home behind the scenes. Now is certainly not the time for complacency, whatever the forecasters may tell them.

May's party may have won countless local and mayoral elections up and down the country last week but she knows that will count for nothing should the polls prove (very) wrong and she's booted out of Downing Street on June 8.

Five days before the general election it's the Investec Derby, which is just as big a deal if you are in the business of turning choicely bred colts into multi-million-pound stallions.

A Guineas double and three other pattern-race victories last weekend were something of a landslide for Ballydoyle, but it's at Epsom that they really want the swingometer to point in their direction.

It's where the new Galileo or High Chaparral would earn three times as much in prize-money as the winner did at Newmarket – and be of immense value stud-wise.

Guineas winner Churchill may do a Camelot and turn up himself in the Derby. But he may not – and he may not get the trip even if he does.

His yard has half a dozen others in the top 12 in the Derby betting and Coolmore did not build a huge bloodstock empire without a back-up plan. Or 26.

That's how many other colts O'Brien has entered at Epsom, each of whom will need to be tested in the next few weeks for signs they could be another Australia or Ruler Of The World.

And no fewer than four of them line up in Thursday's MBNA Chester Vase, a trial the trainer has won in each of the last four years and seven times in the last ten.

Which is the pick of his quartet of unexposed, gorgeously bred colts? Who knows? Ryan Moore is on Tipperary maiden winner Venice Beach but Donnacha O'Brien's mount The Anvil is the one with Group-race form – and Port Douglas went mighty close to upsetting the yard's odds-on US Army Ranger, ridden by Moore, in this last year.

Campaigning for the opposition

For all O'Brien's desire for a strong and stable team for Epsom, it is three years since he won the Derby, while John Gosden is bidding for a second victory in three seasons.

The dual former champion trainer may not have ammunition to rival Ballydoyle but his Cracksman is already a prime candidate for June 3 and here Sandown Classic Trial-winning stablemate Cunco has his chance to stake his claim – and boost Frankel's reputation as a sire.

Stepping up from maiden victories are Count Octave, Tamleek and Druids Cross – whose trainer Joseph O'Brien will know more about how to beat his father than most.

Ed Balls has shown that there is life after election defeat, and Classic failure need not mean career disaster either.

Deauville was 11th in the Derby last year yet crossed the Atlantic to land the Belmont Derby in New York, followed up with third place in the Arlington Million and ran as well as ever when second on last month's comeback at Sandown.

The form book makes him the one to beat – with no penalty – for O'Brien and Moore in the sportingbet.com Huxley Stakes. But the history book suggests having a saver on Poet's Word. For all that it was only a handicap that he won at Chelmsford last time, he did it impressively off a mark of 104 and Sir Michael Stoute knows exactly what is required having won this six times since 2001.

There could just be a Derby clue on offer beside the Seine as well as the Dee, specifically in the Prix Matchem at Maisons-Laffitte in Paris.

Andre Fabre runs Godolphin's Franz Schubert, up against the Hughie Morrison-trained Temple Church, who is also entered at Epsom, and the William Haggas-trained Executive Force, who isn't.

Some people will do anything to avoid yet another party political broadcast.

FIRST PUBLISHED 6:00PM, MAY 10 2017
That is the message that Theresa May and Aidan O'Brien will both be hammering home behind the scenes