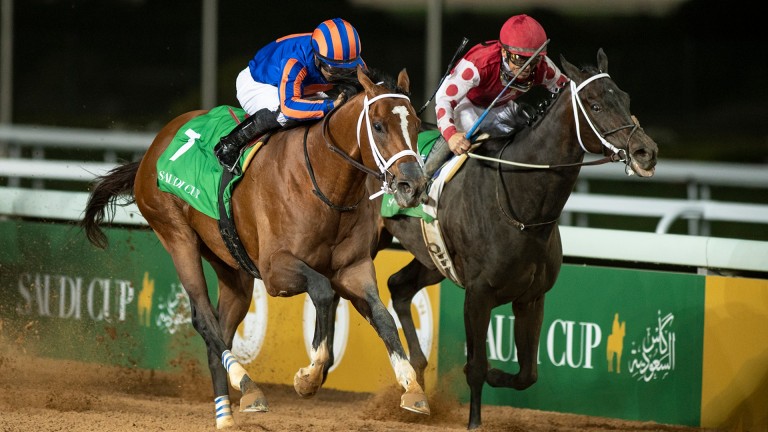 Many were drawn to the desert in search of riches but it was Maximum Security who landed the spoils in the world's most valuable race.

The four-year-old, carrying the colours of Coolmore partner Michael Tabor for the first time after the bloodstock goliath purchased 50 per cent from owner-breeders Gary and Mary West, was controversially demoted after passing the post first in the Kentucky Derby but made amends in this $20 million contest when winning by three-quarters of a length.

He held on bravely to beat another US-trained runner, the fast-finishing Midnight Bisou, with Godolphin's Benbatl fending off Pegasus World Cup winner Mucho Gusto to finish third for Saeed bin Suroor on just his second run on dirt.

It is hard to comprehend the pressure faced by winning jockey Luis Saez, for whom the finishing line must have appeared like a mirage at the end of the long straight as he rode a strong finish with the $10m first prize at stake.

"It was a historic moment for me and for racing," said Saez, shortly after collecting his prize from King Salman. "It was a tough race but we did it. For a second I thought we were going to be be beaten but he has such a big heart. He's the toughest horse I've ridden.

"He's the true Kentucky Derby winner. It's amazing to get a victory for the US, Panama and all my people. I don't have any words for this," he added, before paying emotional tribute to his brother Juan, an apprentice jockey who died after sustaining injuries on the track in Indiana in 2014.

Trainer Jason Servis was reluctant to talk at length about Maximum Security's demotion in the Kentucky Derby, admitting he would talk all night about it, but felt the victory offered some vindication. 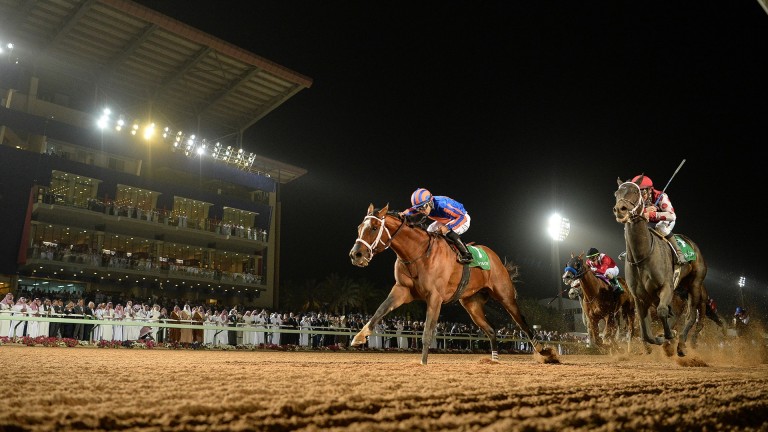 "I can't believe it, it's going to take a week for it to set in. It's been the experience of a lifetime being able to train him," he said, barely visible behind in the sizeable Saudi Cup trophy.

"I'm a little superstitious and I don't like to talk too much before a race but when he breezed in the last few days he covered the ground beautifully. He had a presence about him."

Maximum Security will stay in training but connections would not be drawn on a possible target, although the talented four-year-old was cut to as short as 5-2 for the Dubai World Cup.

The race attracted some of the world's best dirt horses, with ten runners in the 14-strong field having won at Group or Grade 1 level.

However, there were moments of doubt over who would partner them after some jockeys were delayed due to the global outbreak of coronavirus, but most were duly recompensed, with prize-money going down to tenth place, which was worth $200,000.

The Saudi Cup is the latest in a long line of high-profile events to be staged in the country, such as the heavyweight title fight involving Anthony Joshua last December, and the oil-rich nation has been accused of using sport in an attempt to furnish its image abroad.

Organisers argue Saudi Arabia is entering a more open era and they are hopeful it can become an established power in the racing world.

If the volume of international runners in its flagship race is anything to go by, that could well be achieved sooner rather than later.

Read The Lowdown from 8.00am daily onracingpost.com and the Racing Post app for all the day's going updates, news and tips

FIRST PUBLISHED 6:10PM, FEB 29 2020
He's the true Kentucky Derby winner. It's amazing to get a victory for the US, Panama and all my people