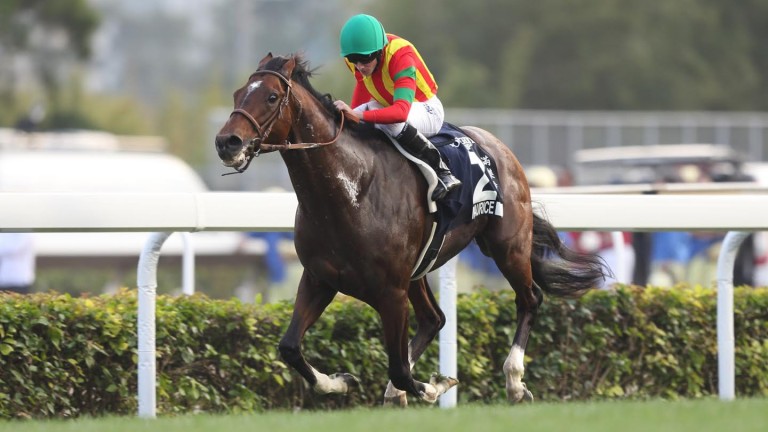 Maurice and Ryan Moore were superb in winning the Hong Kong Cup by three lengths
Masakazu Takahashi
1 of 1
By Stuart Riley in Hong Kong 1:41PM, DEC 11 2016

Quite simply, Maurice is a superstar. Just about everything that could have gone wrong did, yet he still won the Hong Kong Cup with breathtaking ease with a performance comprising equal parts of power and panache.

Just like last year the defending champion A Shin Hikari set a blistering pace; going into the home turn he was five lengths clear and turning in it was seven, with Yutaka Take yet to get serious. The entire time Ryan Moore on Maurice remained third last, trapped on the rail, some 15 lengths off the leader.

Rolling off the bend Moore made rapid headway on the Japanese star as the field fanned out in front of him, but he still needed a gap and needed to switch twice to get it. He still had three lengths to find, but the second he got it the race was over as Maurice just took off.

It was reminiscent of Sea The Stars in the Arc. He simply shot clear, dismissing a classy field with contempt.

Moore came here with a very real chance of claiming all four Group 1s. He suffered a frustrating day, but you would not have known it after he'd ridden Maurice in the last of the top-flight contents. A man not known for using several words when one, or none, will do, Moore was talkative when it came to Maurice. He is horse who makes him light up, a real favourite.

"It's always a lot of fun," he said of riding last year's Mile winner and now six-time top-level winner. "Nori [Noriyuki Hori, trainer] asked me on the way out, 'You're okay?', and I said, 'I'm always okay when I'm riding Maurice'."

On the difficulties the race presented, he added: "The only other thing that could have gone wrong is the pace could have been slower. But he's just a great horse.

"He's a pleasure to ride 99 per cent of the time. Just before the gates opened he made it a little bit more difficult. Fortunately there was good pace in the race. Halfway down the back I thought it was setting up nicely for him, it was just a matter of finding the room.

"As soon as I found the room and I put him into gear he just let down exceptionally well. He got to the lead early in the end and then was just easing up. He's improved every time I've ridden him."

On how just how good Maurice is, Moore, who was winning an incredible 20th Group/Grade 1 of 2016, added: "He's a brilliant horse. He's very good at a mile but he's possibly better at ten furlongs. He's improved. He's a big strong horse and he's got better with racing. He's been a pleasure to ride."

The Cup was reportedly Maurice's swansong but Hori, who was winning his second Group 1 of the day after Satono Crown's success in the Vase, playfully teased his vast legion of supporters in his homeland. Asked to confirm if this had indeed been the last hurrah he simply said: "That's what they've been writing in the newspapers."

On the performance, he added: "He seems to really like Hong Kong. The horse, the jockey and staff all tried really hard, so it's a mutual team effort and it feels great. And we get so much support from the Hong Kong Jockey Club."

Japan's other retiring superstar, A Shin Hikari, still led with three-quarters of a furlong to go, but then early exertions took their toll and he faded to finish tenth.

Take said: "He ran his race but he was a little disappointing in the home straight."

FIRST PUBLISHED 11:19AM, DEC 11 2016
He's a brilliant horse, a big strong horse who has got better with racing. He's been a pleasure to ride