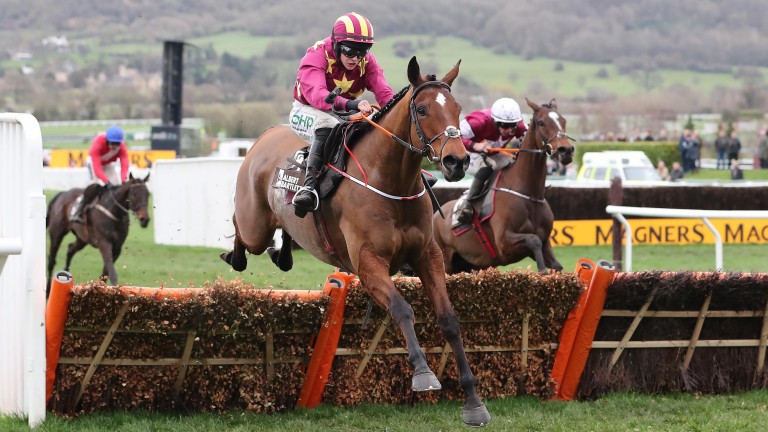 Minella Indo: got RSA Chase written all over him
John Grossick (racingpost.com/photos)
1 of 1
By Matt Williams 6:00PM, NOV 22 2019

The Tote Ten to Follow has been a big miss, especially for National Hunt fans. The competition used to always enhance my enjoyment of the season and just seeing my name appear on the leaderboard on the odd occasion was a buzz.

Strategy is important, luck plays a part and a bit of left-field thinking can make all the difference, although Altior and Paisley Park are bankers.

Rich Ricci has unearthed another gem in Chacun Pour Soi, but he is fragile and needs a clean run at his targets to score well. If Altior wins the King George, staying well, surely connections will want to have a crack at the Gold Cup, though, and that could leave the door open for Willie Mullins’ chaser to have a proper go at the Champion Chase.

The Champion Hurdle picture is grim. For a race steeped in brilliance and excitement I can’t get up for it this season and I think some of the big owners are missing a trick. There are a lot of 1m2f-1m4f horses on the Flat the Aussies don’t want for the Cup, some of whom could easily make up into proper hurdlers.

You need something to win the Champion Hurdle, though, and my protest vote goes to Buveur D’Air. He’s been brilliant and is still young enough to regain his crown.

If you pick novices, over hurdles and fences, you can’t afford to miss with them. It’s early days, but Gordon Elliott is holding all the aces with the likes of Andy Dufresne and Envoi Allen. Elliott might run them both in the Royal Bond next month, which is a fair test of speed for two hurdlers likely to need more of a trip. I think Envoi Allen is a bit sharper, so he’s in.

I never truly bought into Samcro over hurdles, with some claiming him as the second coming early doors. The hype was put to bed last year and it was great to see the horse just enjoying himself on his chase debut at Down Royal on his reappearance.

Hopefully his minor ailments are behind him and he’s set for a good campaign over fences. Festival targets are hard to predict, but you often need a stamina horse to win the Arkle and I think he’s got the gears for a test like that. Melon disappointed me the other day behind Fakir D’Oudairies and I don’t know if the quality is going to be there at the very top end of the division.

Minella Indo was a slow burner last season and it could be a similar story with him again. Henry de Bromhead won’t have him at his very best until next spring, when it matters the most, and he’s got RSA Chase written all over him. Don’t jump ship if he isn’t setting the world alight early doors as Cheltenham is made for this horse.

Dickie Diver was raw last season and didn’t enjoy the run of the race behind Minella Indo in the Albert Bartlett, running on into fourth. He’s miles better than that form and there are plenty of races to be won with him. I just want him on the team.

Lostintranslation is superb over a fence, arguably the best jumper of the big ones knocking around, and he’s going to take a lot of these top-class chasers to a place they don’t want to go in top races – he’s that good.

I’d like to think he’s a Cheltenham Gold Cup horse, although asking him to jump the way he does, giving everything over the Gold Cup trip, is a big ask. If he can pull it off, what a sight that will be.

As a punter, I don’t want to see another mares’ race at the festival. It’s a really bad decision to include more of them and they draw the buzz from the day for me, like those Arab races occasionally tagged on to a great day’s racing. I love a good mare, but how many of them are there around? Not enough to support their place at the top table is the right answer. Benie Des Dieux is tidy, though.

I think there’s more chance of winning the Euromillions than that list drawing, but I’ll be throwing a few arrers at the comp and mixing it up a bit. Good luck everyone.