Match of the Day 2: Hardy Du Seuil makes up for first-fence fall in style 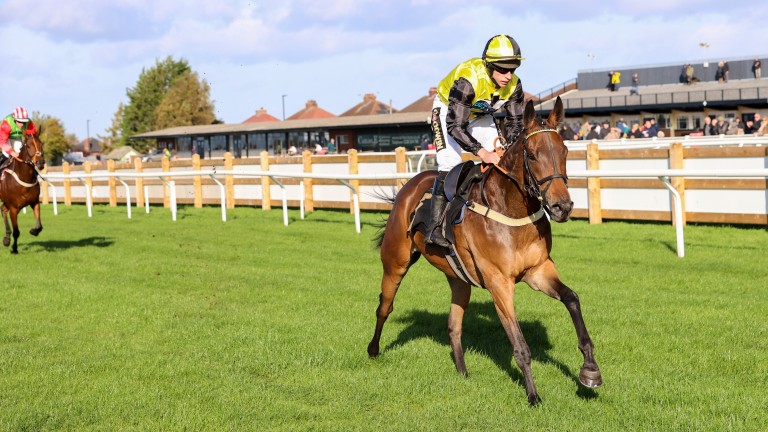 Hardy Du Seuil: stormed clear of his only rival at Carlisle on Thursday
GROSSICK RACING
1 of 1
By Andrew Dietz 6:37PM, OCT 21 2021

Hardy Du Seuil was involved in a match for the second race in a row, but the outcome could not have been more different from last week at Wetherby.

A first-fence faller eight days earlier, the Jamie Snowden-trained four-year-old was much more assured on his second chase start as he caused a minor surprise in the 2m4f novice chase.

In a race run at a steady pace, the 100-30 winner had too much speed for 1-5 favourite Tupelo Mississippi in the closing stages to make amends for his mishap last time.

Owner Simon Beccle was the only member of The Hardy Souls syndicate to head north again and was rewarded for his loyalty.

"There are ten shares in this horse and we were all at Wetherby and I kept the faith by jumping on the train up from London," he said.

"We didn't expect that at Wetherby and, although the object today was to get round, he's done it nicely. He's a big baby, he did a lot wrong but it all came good at the end."

The race lost a lot of its interest when three of the five declared runners, including Grade 1 Sefton Novices' Hurdle winner Ahoy Senor, were taken out because of the good ground.

After just 11mm of rain in a week, the course was watered before the fixture and clerk of the course Kirkland Tellwright said: "For once, Carlisle is a bit late in getting wet. It's a long season and if you're in doubt, you can understand the temptation to wait a week or two."

Generator City, who beat Grand National hero Minella Times on his final start in Ireland two years ago, won for the first time since in the 3m2f handicap chase.

The eight-year-old has not been easy for Barry Leavy to train, but he showed a willing attitude to score under Sean Quinlan, who rode a 129-1 treble after winning both divisions of the 2m4f handicap hurdle for trainer Nicky Richards on Rickety Gate and Headscarf Lil.

Leavy said: "When we bought him at the sales he was lame but Denis Hogan said he'll be all right as he fell over in the boat. It's taken a long time to get him right, but he ran all right on his last two starts." 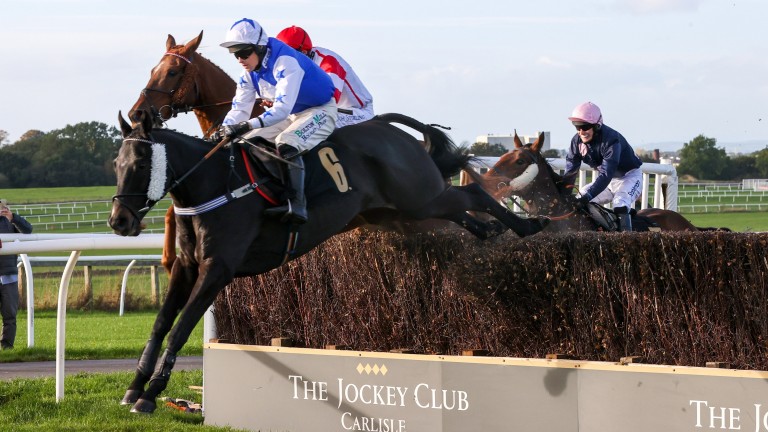 Generator City: "It's taken a long time to get him right"
Jonathan Grossick

In the same race, jockey Ross Chapman was involved in a nasty incident after falling at the fourth-last on Louis' Vac Pouch and then being kicked by Mance Rayder, who was pulled up after being hampered.

"He's conscious but shaken up and has gone to hospital in Carlisle for assessment," said Tellwright, who reported both horses to be unscathed.

Title duo fight it out

Last season's title rivals Harry Skelton and Brian Hughes fought out the finish to the 2m4f novice hurdle, with the champion jockey gaining the upper hand on Kayf Hernando.

Skelton got the 5-1 shot home by a neck from the Hughes-ridden 8-13 favourite Mister Whitaker, the 2018 Cheltenham Festival winner making his first start over hurdles since April 2017 on his debut for Donald McCain.

"He ran nicely in a bumper at the back end of last season and it was a really nice hurdle debut," said Skelton.

After a quiet summer, Skelton finds himself well down the jockeys' standings on 22 winners, with Hughes well clear of the pack on 73.

FIRST PUBLISHED 6:37PM, OCT 21 2021
We didn't expect that at Wetherby and, although the object today was to get round, he's done it nicely