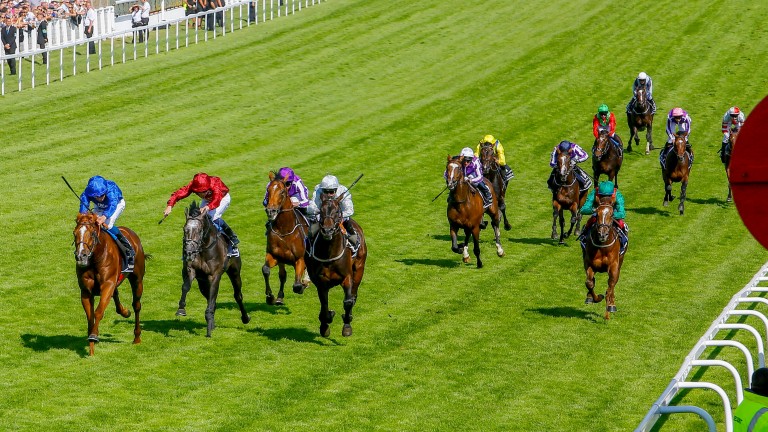 Charlie Appleby is unconcerned by criticism of the Derby form and is in a confident mood ahead of Masar's run in Saturday's Group 1 Coral-Eclipse Stakes.

The Derby winner was supplemented for the race at a cost of £50,000 and is the sponsors' 5-4 favourite, with Derby third Roaring Lion 9-4 second favourite and fellow three-year-olds also occupying the next two places in the ante-post market.

However, since the five who ran at Epsom failed to distinguish themselves in Saturday's Dubai Duty Free Irish Derby, there has been a growing feeling that the form might be suspect.

Appleby is not having it and points out that his colt, who earlier finished third in the Qipco 2,000 Guineas, was a good winner of the race and in no way fortunate.

He said: "I'm not worried about what people say about the Derby form because they're basing it on what happened in the Irish Derby, which turned out a very different sort of race.

"I felt it was run in a completely different style to the Epsom Derby, as they went no pace and it was quick ground.

"It's been mentioned that Dee Ex Bee [Derby runner-up] wasn't suited by the track or the ground, but more important I think was the pace angle, which jeopardised a few of them."

How the Derby form is working out

He added: "At the end of the day Masar won the Derby well. It's not as if he was a lucky winner.

"He travelled well throughout the race and, for me, if you wanted to stop the video anywhere in the last half-mile of the race you would pick him out as the winner. He was a clear-cut winner and he's come out of the race very well."

Appleby believes Sandown – where Masar won the Group 3 Solario Stakes as a two-year-old – will play to his strengths, and he was delighted with the colt’s racecourse gallop on Newmarket’s July course early on Saturday morning.

He said: "Conditions at the weekend should suit Masar and I was very pleased with his gallop on the July course on Saturday morning. It's been so dry that he hasn't seen much grass since the Derby, and I was keen to see him do a nice, sensible piece of work.

"He travelled over seven furlongs behind the two horses who led him into the Derby and I was very impressed visually with the way he came clear when Brett [Doyle] allowed him to extend himself.

"He was good last year in the Solario Stakes, which has worked out well with [runner-up] Romanised winning the Irish Guineas, and I was always confident he'd be better at three and stepping up in trip. Thankfully that's been proved right."

Appleby is also likely to run his 2016 winner Hawkbill, who won the £2.66m Sheema Classic at Meydan in March and got his career back on track with a respectable third behind Poet's Word at Royal Ascot after a poor run in the Coronation Cup.

He said: "He's very much on the radar for the Eclipse and it'll be discussed over the next 48 hours. He's a past winner of the race and coming back to ten furlongs in the Prince of Wales's after that disappointing run in the Coronation Cup didn't worry him too much.

"We changed things around and put blinkers on him there, and we were pleased with his run behind two good horses. We felt he should be left in, and he doesn't look out of place."

The going at Sandown remains good to firm, with GoingStick readings at lunchtime on Tuesday of 7.8 on the round course and 7.5 on the sprint track.

The groundstaff are watering off and on for 16 hours a day just to maintain it at good to firm, but the wind has picked up, making what was already hard work even harder.

FIRST PUBLISHED 4:09PM, JUL 3 2018
Masar travelled well throughout and if you wanted to stop the video anywhere in the last half mile you would pick him out as the winner