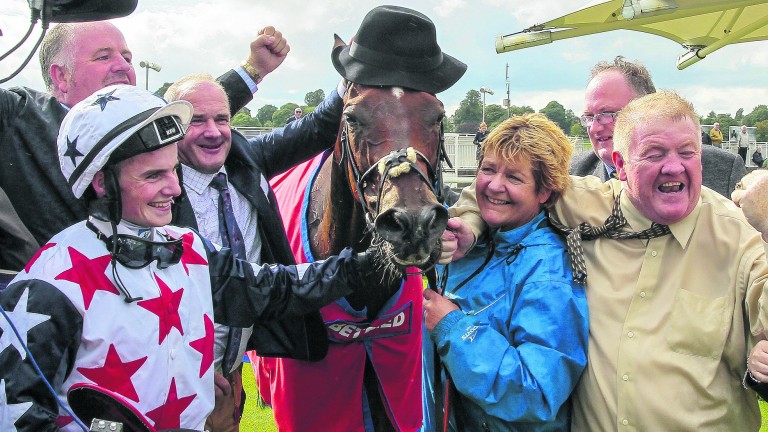 Heartbreak City and connections could be heading to Prestbury Park in March
Mark Cranham
1 of 1
By David Jennings 10:23AM, NOV 18 2016

Melbourne was almost mastered; now it is time to conquer Cheltenham. Heartbreak City and his colourful owners could be heading to the Cotswolds in March for a tilt at either the County Hurdle or the Coral Cup after Tony Martin revealed his versatile six-year-old is set to be sent back over hurdles.

Only Almandin came between Heartbreak City and a famous Melbourne Cup victory but big handicap hurdles off his mark of 125 are now on the agenda according to Martin, possibly starting at Leopardstown over Christmas.

Heartbreak City had been under consideration for the Hong Kong Vase and is 6-1 for the race with bet365, but Martin said: “He'll head back over hurdles now. We had a terrific time in Melbourne and he gets home on Thursday.

"He is very versatile. He almost won a Melbourne Cup on quick ground, yet he won a handicap at Cork on heavy ground. That tells you all you need to know. He can run over any trip, Flat or hurdles, on any ground and at any track.

He added: “I would imagine you will see him back in a handicap hurdle around Christmas time, maybe at Leopardstown. We will have a look at some of them big hurdles then next spring, with a view towards Cheltenham. He has loads of options and the Coral Cup or County Hurdle would be obvious ones but he could go anywhere.

"I know people think that he must be well handicapped over hurdles but the fact of the matter is that he is just not as good over hurdles. He is not a natural jumper and that could be a big factor so it is not as straightforward as you might think.”

Martin also issued an update on Anibale Fly who won a hot beginners' chase at Navan on Sunday.

“You would have to be very pleased with the way Anibale Fly got the job done. He jumped well and he is a lovely horse. We will take our time with him, though.

"He's a young horse and we don't want to rush him. Things are going well at the moment. My horses were not right last winter but we've got our gallop motoring now and things are ticking along nicely,” Martin added.