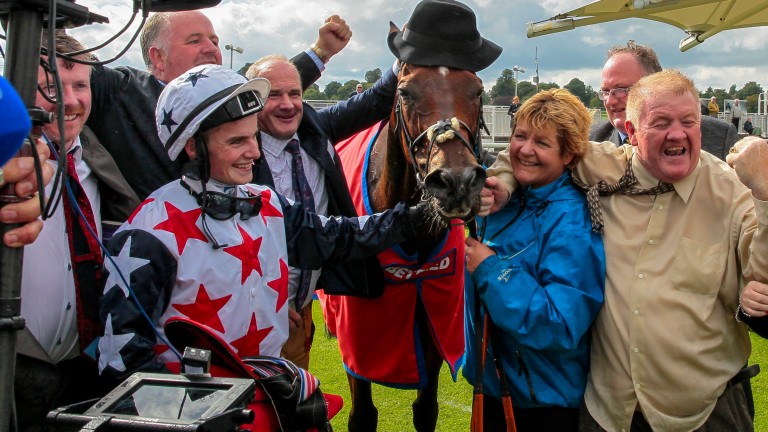 Heartbreak City (wearing hat) with his jubilant connections after his Ebor win at York last year
Mark Cranham
1 of 1
By Bruce Jackson 7:54PM, MAY 7 2017

Heartbreak City, winner of the Ebor and beaten a short head in the Melbourne Cup last year, has had to be put down after breaking a leg in a racecourse gallop at the Curragh on Saturday.

His death reverberated around the world as the seven-year-old is owned by the Here For The Craic Partnership, a group of Irishmen headed by Boston-based Ray Shiels and joined after the Ebor success by Australian Thoroughbred Bloodstock headed by Darren Dance.

Heartbreak City's trainer Tony Martin said: "It's very sad. He did everyone proud and was more than a horse, he was some character and so genuine.

"It is unfortunate as so many people wanted him when he retired because he was such a lovely horse.

"He took us to so many places and the plan this season was to go back out to Melbourne and have another whack.

"He was having a gallop ahead of running on the Flat next week at the Curragh. Unfortunately all good things come to an end."

A devastated Dance told racing.com: “It’s obviously not what you want to hear at 3am when I got the call. It’s just so tragic because he was such a lovely, quiet animal and he gave us so much joy over the spring.”

Adam McNamara, who rode Heartbreak City to glory, said: "He gave me the best day of my life and it's hard to put into words how I felt winning the Ebor. It's a very sad loss and he had the heart of a lion. He was so tough and genuine and will be sorely missed."

Heartbreak City's last race had been on World Cup night at Meydan when he finished down the field in the Group 2 Dubai Gold Cup.

The gelded son of Lando hit the headlines last year after an underwhelming first two years with Martin after being bought from France, where he had won a Chantilly handicap.

Martin said: "It took a long time for the penny to drop. He was so free in his races, but it all came together last year in the Ebor and then the Melbourne Cup."

Heartbreak City started that year winning the Cork Handicap on the Flat before disappointing in the Chester Cup only to win a maiden hurdle at Tipperary before landing the Guinness Hurdle at the Galway Festival.

Three weeks later he made history on the Knavesmire by becoming the first horse since the great Sea Pigeon in 1979 allotted more than 9st 4lb to triumph in Europe’s richest Flat handicap.

Set to carry 9st 6lb – minus his jockey's 5lb claim – Heartbreak City was given the coolest of rides by apprentice McNamara as he landed a gamble, winning by four lengths from Shrewd, with stablemate Quick Jack in third.

With the Australian Thoroughbred Bloodstock company buying an interest after York, Heartbreak City nearly completed a unique treble going down by a short head under Joao Moreira to Almandin in the Melbourne Cup.

FIRST PUBLISHED 11:46AM, MAY 7 2017
He did everyone proud and was more than a horse, he was some character and so genuine