Six for the weekend: Marsha can march on in sprint division 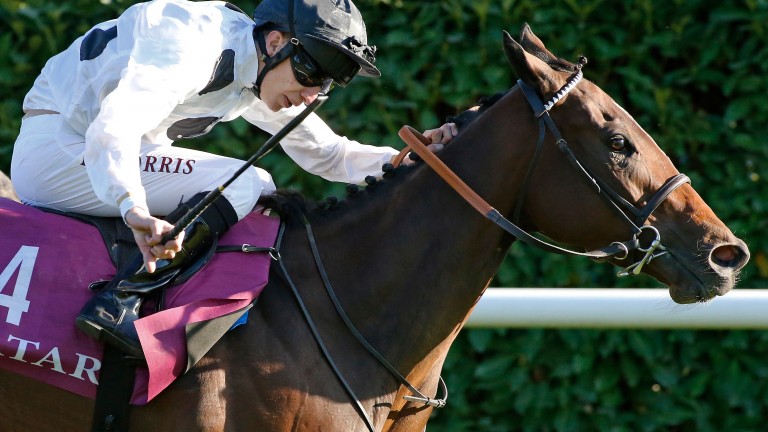 Marsha and Luke Morris power to Group 1 glory in the Elite Racing Club colours
Alan Crowhurst
1 of 1
By Peter Scargill 10:29AM, MAY 2 2017

She got better and better as the season went on, ending her campaign with a superb victory in the Group 1 Prix de l'Abbaye at Chantilly.

Her career profile suggests she is entitled to improve again as she gets older, and this will be a good test of her to see if she can hold her own against some of the top sprinters around.

Last year's winner Profitable, former winner Goldream and a whole host of other speedsters are in line to contest this race. It should be a cracker.

If Aidan O'Brien's daughter of Galileo suggested she was a bit special when landing last season's Irish Oaks by two and three-quarter lengths from Architecture then she confirmed it by thumping the subsequent Arc winner Found by the same margin in the Yorkshire equivalent.

She found only Jack Hobbs too good on her seasonal reappearance in the Sheema Classic - finishing in front of the likes of Postponed, Prize Money and Highland Reel - and her Group 1 penalty is offset by her fillies allowance.

She could meet One Foot In Heaven, Algometer, Western Hymn and Across The Stars - all grand performers at this level - but Aidan O'Brien's filly may prove herself a cut above.

Churchill comes into this race with much the best credentials but there is plenty of momentum behind Craven Stakes winner Eminent.

He stepped up impressively on his debut win at Newmarket last autumn by powering to victory over the Guineas course and distance on his return. He will also be partnered by champion jockey Jim Crowley, who has ridden him on both starts so far.

Trainer Martyn Meade tends not to throw his horses into races in which they cannot be competitive, and Eminent's running style, in which he lengthens into top gear as the race progresses, should see him hitting the line hard.

This Investec Derby entrant made a big impression on his belated racecourse debut in a mile maiden at Leicester a month ago.

It is no surprise this son of New Approach steps up both in class and trip as trainer Charlie Appleby continues his education towards a Group-race future.

Leicester maidens have spawned plenty of stars over the years and Zamfir's form has certainly not been devalued as runner-up Mostahel has won well since and Desert Dream won his maiden well at Windsor on Monday.

Those lines still only entitles Zamfir to a rating in the 80s which leaves him plenty to find with others in this Listed contest but 10f will see him in a better light the way he only got on top late over the mile at Leicester.

Ever since she romped to a two and a quarter length victory in the Fillies Mile at Newmarket back in October there has been one day in mind for Rhododendron - Guineas day.

She smashed stablemate Hydrangea, with six lengths back to Urban Fox in third, over the Rowley Mile.

A repeat of that performance would make her very hard to beat in the first fillies Classic and as is always the case with Aidan O'Brien-trained daughters of Galileo, there is the prospect of further improvement to come.

She has followed the same path as last year's winner Minding and is the standout in an exciting field that also includes Nell Gwyn winner Daban and Fair Eva, who is by Frankel and was second in the Rockfel.

Before writing off this Harry Dunlop filly, as her official rating would suggest is a sensible move, go take a look at her in the paddock.

She is a lovely imposing filly who can only get better as she strengthens and matures and her 1m4f maiden beating of colts at Leicester has not turned out to be too bad as runner-up Face The Facts won his Newbury maiden in good style.

She was still wilfully green under pressure at Leicester and Dunlop drops this Nathaniel filly back to 10f for this Listed assignment on a tougher track which will suit her long galloping stride.

She could face her Kempton conqueror Precious Ramotswe on Sunday and that John Gosden-trained filly won that mile maiden well but Flight Of Fantasy could improve past her on the way to Group races.

FIRST PUBLISHED 7:02AM, MAY 2 2017
Her career profile suggests she is entitled to improve again as she gets older and this will be a good test