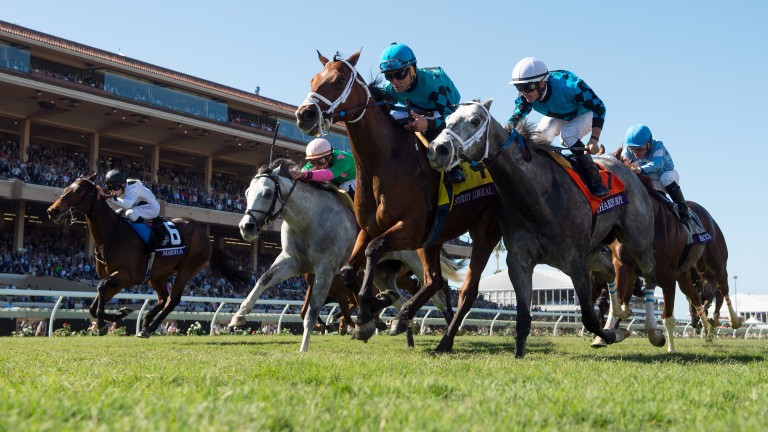 It was a billed as a decider but in the end what happened between Lady Aurelia and Marsha became just a footnote to a Breeders' Cup Turf Sprint settled by a huge upset.

For the record Marsha, who beat Lady Aurelia by a nose in the Nunthorpe Stakes in the summer, again had the edge over her rival but Sir Mark Prescott's first Breeders' Cup runner could finish only sixth and the star of Wesley Ward's stable tenth.

Victory went to 40-1 shot Stormy Liberal, from the stable of local trainer Peter Miller, who beat his own stablemate Richard's Boy
(25-1) in the Grade 1, with Disco Partner in third.

Lady Aurelia, a dual Royal Ascot winner for Ward, was odds-on for her rematch but though away smartly enough to secure a prominent pitch behind the pacey Pure Sensation could find little in the straight.

On her final start Marsha was towards the rear early but came out of the bend on Lady Aurelia's heels and though getting past her opponent was never gaining enough to reach the principals.

Jockey Luke Morris said: "They went very hard from the gate. The plan was to get close to Lady Aurelia. She just struggled on the track. I'd say she is best on straight tracks. She is tough and honest and has held her form right the way through the year."

Prescott said: "I've got no complaints, I thought she was always in the right place, she travelled well, all the horrors you can have were avoided.

"Luke thought turning for home he was in with a shout then they picked up on the inner a little bit better than he hoped. He was following Lady Aurelia who he hoped would carry him a bit further. They're marvellous those two fillies, there's never much between them."

"He [John Velazquez] said he got a good trip, eased her out ready for her punch and it just wasn't there today," he said. "Probably the long year kinda caught up to us. She's such a great horse, she was doing everything we liked to see in the morning but when you gotta dig down deep in your soul, you need that freshness."

Pre-race, the plan for for Lady Aurelia was to stay in training as a four-year-old and return to Royal Ascot next year.

"She'll get a good break and we'll see what the owners want to do," added Ward. "We'll see how she comes out of the race."

Miller, a former apprentice to legendary Charlie Whittingham, trains north east of Del Mar where he is a four-time leading trainer but had never won a Breeders' Cup race.

"I think I've lost my voice," Miller said. "It was just a surreal experience to see Richard's Boy look like he was going to win, and I'm watching Joel [Rosario on Stormy Liberal], and I'm rooting for Joel, and I'm like just one of you win, just one of you win.

"And to run one-two here for my first Breeders' Cup and here at home, I live ten minutes away in Encinitas, is special. It doesn't get any better than this."

However Miller's day did get better as Roy H secured him a double when overhauling Imperial Hint in the Sprint.