Market turning in favour of Cue Card as he displaces River 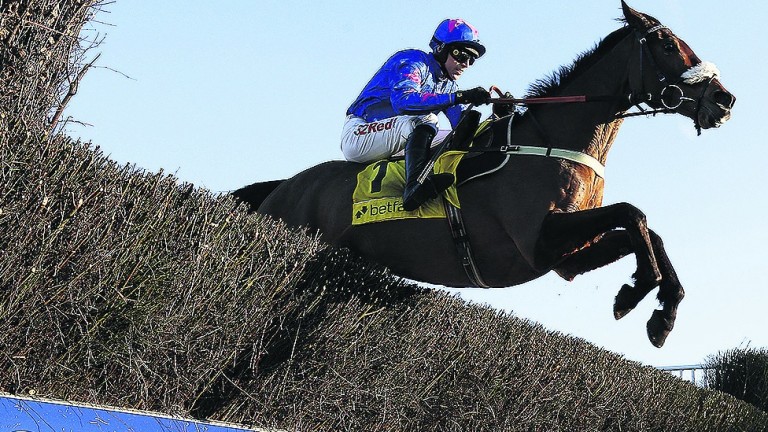 Cue Card became the new favourite for the Timico Cheltenham Gold Cup with several bookmakers on Saturday as the surge of money behind the Colin Tizzard-trained warrior showed no signs of slowing.

Days after being the third most popular in the Tizzard yard for the Cheltenham Festival highlight the 11-year-old knocked stablemate Native River off the top of the market with a number of layers, including Paddy Power, Betway and Betfred.

Native River drifted on exchanges on Saturday before hardening again, but Tizzard insisted all was well with his Welsh Grand National winner.

Available at 8-1 before his Ascot Chase win last Saturday, Cue Card was trimmed into a top-priced 7-2 after news broke on Tuesday of the injury to fellow Tizzard hope Thistlecrack.

Bullish comments from the trainer since have only strengthened the belief that Cue Card can make up for last season’s Gold Cup fall, when travelling well three fences from home, and become the oldest winner since 1969.

Native River was favourite or joint favourite with all firms on Saturday morning but not by the end of racing, with Cue Card a general 3-1 chance for the March 17 contest, the price offered by Paddy Power, who trimmed him from 7-2, Native River going in the opposite direction.

Paul Binfield, spokesman for Paddy Power, said: “Cue Card is our biggest loser in the book ante-post and since we went non-runner-no-bet. And since Colin Tizzard expressed a view that if the horse was not an 11-year-old he would be favourite for the race, punters cannot get enough.”

Unease on the exchanges about Native River helped persuade Betway to flip-flop their favourites, making Cue Card 3-1 (from 100-30) and Native River 100-30 (from 11-4), while Betfred made a similar move.

Betway spokesman Alan Alger said on Saturday: "Native River has been notably weak in the betting all day, while there's been solid support for Cue Card."

Tizzard rubbished fears there was anything amiss with Native River, unbeaten over fences this season in the Hennessy Gold Cup, Welsh Grand National and Denman Chase.

He said on Saturday: “They’re both absolutely fine. Someone texted me on the way up [to Kempton] asking if Native River is out of the Gold Cup and I said no he’s not!

“He’s lovely and did a proper bit of work today. I couldn’t be anymore pleased with him. It’s the same with Cue Card.”

FIRST PUBLISHED 6:45PM, FEB 25 2017
Since Colin Tizzard expressed a view that if the horse was not an 11-year-old he would be favourite for the race, punters cannot get enough