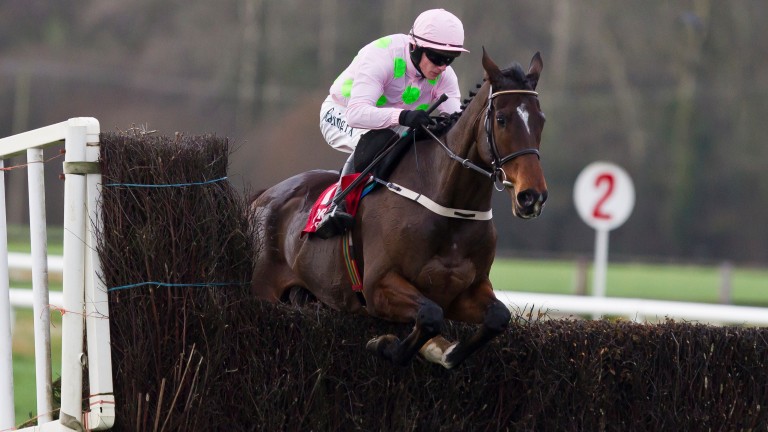 Douvan and Paul Townend measure a fence on their way to victory
Patrick McCann
1 of 1
By Richard Forristal 1:08PM, DEC 13 2016

On a day when Willie Mullins' firepower blasted him back towards leader Gordon Elliott in the trainers' title standings, Douvan was cut to a best-priced 8-13 (from 4-6) by the sponsor of the Betway Queen Mother Champion Chase after giving his Hilly Way rivals a thumping.

The bloodless rout of six opponents at Cork on Sunday suggested he has returned as formidable as ever, and while the 32Red King George VI Chase is seemingly not the aim, further Grade 1 glory definitely is, with the two-mile chasing crown at Cheltenham in March looking top of the wishlist.

Douvan was one of half a dozen winners on Sunday – two at Cork and four at Punchestown – for defending champion trainer Mullins, who ended the day €386,963 behind Elliott having notched up prize-money of €135,706 across the two meetings.

Douvan, last season's brilliant Arkle Chase hero, has racked up no fewer than five Grade 1 triumphs in his first six starts over fences, and in accruing an average winning distance in excess of 12 lengths over the bigger obstacles, he has never looked less than exceptional.

A majestic 22-length demolition job at Cork at odds of 1-6 stretched the average to nearly 14 lengths. It was an emphatic display and it confirmed at the very least that Douvan has trained on nicely.

On his 11th start for Mullins, Douvan took Paul Townend into the lead as they approached the first fence.

From there he ran amok to maintain his unbeaten run for Mullins. Bar a slightly clumsy effort three out, Townend didn't have a moment's concern, as he added to his record as the €50,000 Grade 2 event's most successful rider with a fourth win.

"That was a massive thrill," Townend gushed after partnering the athletic Walk In The Park six-year-old for a third time. "He was awesome."

Of the mistake three out, he added: "He was in front a long time on his own and it probably opened his eyes again, because he went down and winged the second-last.

"He was very good. He was gassy early, but it was his first run of the year and he did everything right."

Douvan's victory, which came hot on the heels of Djakadam's John Durkan win at Punchestown for Mullins and Rich Ricci, means that the trainer has now won this two-mile race nine times since 2007. Days Hotel, the only horse to thwart him in that time, filled the runner-up berth on this occasion.

Mullins' representative at Cork was David Casey, who was as impressed as everyone else.

"Paul said he was hacking at all stages and thought that he was actually going slow," said the former rider, who initiated Mullins' Hilly Way bonanza aboard Our Ben in 2007.

"That's the type of horse we are dealing with. He has so much class.

"It's a brilliant start to his season and it's a great race to come and win. We didn't really want to take him to England for the Tingle Creek for his first start, and thankfully it has all worked out.

"For his first step out of novice company, I thought this was hugely impressive."

The on-fire Mullins was at Punchestown, where he said: "The King George wouldn't be in our plans at the moment. I'm happy enough to stick to two miles."

Mullins was on Sunday night a best-priced 8-11 with Betfair Sportsbook to successfully defend the trainers' title, with Elliott at 6-4 with Betway.

FIRST PUBLISHED 6:59PM, DEC 11 2016
He was very good. He was gassy early, but it was his first run of the year and he did everything right