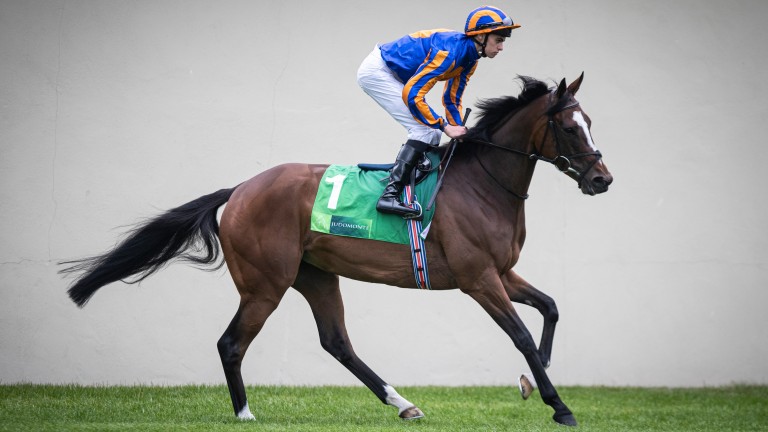 Magic Wand started the new year as she ended the last with a valiant performance in defeat on the international stage when finishing second to Zulu Alpha in the Grade 1 Pegasus World Cup Turf at Gulfstream Park on Saturday.

The admirably tough and consistent Aidan O'Brien-trained mare, who was agonisingly denied a short head by Win Bright in last month's Hong Kong Cup, filled the runner-up spot in the Turf for the second year in a row, beaten two lengths by Zulu Alpha.

Breaking quickly from the widest draw under Ryan Moore, Magic Wand attempted to make all and so nearly succeeded until Tyler Gaffalione weaved his way through a tight gap on the inside rail on the Mike Maker-trained winner.

Magic Wand, making her 18th start in a top-level contest around the world, raced 12 times last year and showed her appetite and durability remains as strong as ever on her first outing as a five-year-old.

Zulu Alpha, bought for $80,000 by owner Michael Hui after winning a claiming race at Churchill Downs in 2018, won a Grade 3 contest on this card last year and rewarded the ambitions of his connections with a career-best victory.

"It was a super team effort and congratulations to Michael Hui," said Maker. "He has been a fabulous find for me. He's always been a good horse but he's really tipped his hand after some time off the farm."

The former John Gosden-trained Without Parole was sent off favourite under Frankie Dettori, but faded late on to finish 11th of 12 on his second start for Chad Brown.

The prize-money for the Pegasus World Cup might have been greatly reduced, but Mucho Gusto was a box office winner of the $3 million contest for stay-at-home trainer Bob Baffert at Gulfstream Park on Saturday.

When Baffert won the inaugural running in 2017 with Arrogate it was the richest race in the world and Mucho Gusto put in a display worthy of its former billing with a totally dominant success.

Although the Grade 1 had also lost some of its lustre when the two market leaders – Omaha Beach and Spun To Run – were late scratchings, Mucho Gusto had the limelight all to himself as he took up the lead turning in before powering to a four and a half length victory under Irad Ortiz Jr.

"Those are the most exciting ones, when you don't expect it," trainer Bob Baffert said speaking via phone to the BloodHorse. "When he tilted out at the quarter pole, all I could say was, 'Damn, I wish I would have flown down there!' But it was pretty exciting."

Having guaranteed an invitation to the inaugural Saudi Cup, Mucho Gusto is set to head overseas for the $20 million contest in five weeks' time.

"He just showed up. We've always wanted to see him run a race like that, but he got beat by Maximum Security and he's been chasing some really good horses. It was a different field today," added Baffert.

"He didn't get an invite to the Saudi Cup, so I thought if he runs well enough he'll get an invitation, and who would know that the race fell apart there at the end [with the absence of Omaha Beach and Spun To Run], unfortunately."

Cheltenham, Aintree - and now Ascot? De Bromhead adds filly to Coronation mix Bob Baffert and Medina Spirit owner file lawsuit over Kentucky Derby test result 'Plenty of options' as one-time Derby hope Highest Ground bounces back My Sister Sarah and Metaphorical contribute to Wayne Lordan's treble Size is everything after all as Snowfall and Adayar shoulder their rivals aside 'He shows everything at home - he relaxes, he quickens, he gallops'