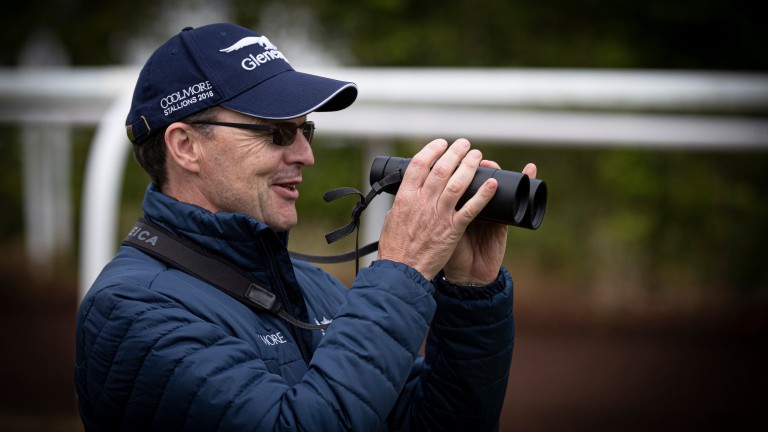 Aidan O'Brien: takes aim at the Brownstown Stakes, the only Group race in Ireland missing from his CV
Patrick McCann
1 of 1
By Brian Sheerin UPDATED 8:17AM, JUL 14 2019

Aidan O’Brien will complete a clean sweep of Ireland’s current collection of Group races if Fire Fly, Gossamer Wings or I Remember You can land this Fairyhouse feature for the master of Ballydoyle.

The Brownstown Stakes, which was elevated to Group 3 status in 2003, is the only Pattern race in this year's Irish programme book missing from O'Brien's stunning CV.

Speaking about his trio, which is headed by Fire Fly, the mount of champion jockey and son Donnacha, O’Brien said: “Fire Fly was slowly away in the Jersey Stakes last time and was never able to get into the race. We've been happy with her since and she had run well at Leopardstown before Ascot. We're hoping to get some black type for her.”

On Gossamer Wings and I Remember You, O’Brien added: “Gossamer Wings had good form over shorter last season and will be running over the trip for the first time. We're hoping that might suit her. I Remember You needs to improve, and hopefully she will.”

In his quest to tick this box, O’Brien will face stiff opposition from British-based trainers Hugo Palmer, Ed Walker and David O'Meara.

Palmer's Heavenly Holly will be running in Ireland for the first time and bids to put a disappointing effort on the all-weather at Chelmsford behind her.

The trainer said: "Heavenly Holly is in great order and she possibly was in season last time which is why she ran flat last time. She has a nice draw and will like the ground. No Group 3s are easy to win but we're hopeful."

The in-form Ed Walker is represented by Indian Blessing, another who disappointed latest when down the field in the Group 2 Duke Of Cambridge Stakes at Royal Ascot, while O'Meara runs the Cheveley Park Stud-owned Perfection, unlucky in the Wokingham at the royal meeting.

The home team is completed by the Michael Halford-trained top-rated mare in the line-up, Surrounding, while rookie trainer Jack Davison believes his Black Magic Woman, a winner over course and distance on her latest start, can surprise a few.

Davison said: “All indications are that she’s improved since her latest win, which she’ll have to, but coming back as a previous course and distance winner should help. We’re looking forward to a big run from her.”

Ryan Moore: 'I try not to offend anyone but for me it's always about the horses' Trainers' title race blown wide open - and we might just have a fairytale winner 'She's very much the matriarch' - You'resothrilling a true blue hen for Coolmore This time it will be tears of joy if Lady Bowthorpe can land famous Group 1 win 'The more rain the better for Trueshan' - trainer quotes on the Group 1 'She's back in top form and working as well as ever' - key quotes for the Corrib