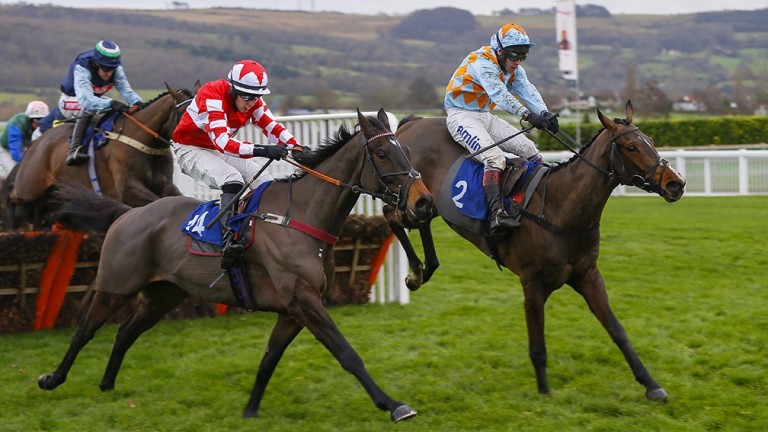 Mad Jack Mytton (far side) is named after an interesting character
Edward Whitaker (racingpost.com/photos)
1 of 1
By David Ashforth 9:15AM, FEB 8 2017

Mad Jack Mytton returns to the county where he was born in order to run in a chase at Ludlow (3.10). It's the sort of thing Mytton would do if he hadn't died 183 years ago.

John, alias Jack, Mytton was born at Halston Hall in Shropshire in 1796, two years before his father died. When Jack grew up, in as far as he ever did, he discovered that he owned an enormous estate with a huge annual income.

With so much money to play with, education had little appeal. Expelled from Westminster School for fighting a master, Mytton failed to stay the course at Harrow before arriving at Cambridge University with no academic intent but dedicated to the 2,000 bottles of port he brought with him.

In 1819, deciding to become MP for Shrewsbury, Mytton did so by paying electors lavishly for their votes. A single appearance in Parliament satisfied him that Westminster was too boring to warrant a second appearance, although he did serve as High Sheriff of Shropshire in 1823 and as Mayor of Oswestry the following year.

Mytton was much keener on horses, so much so that he put one in a tutor's bedroom and later encouraged a horse called Baronet to join him in front of Halston Hall's living room fire.

He liked to share his interests with his horses, which was unfortunate for one named Sportsman, who died after drinking a bottle of mulled port.

Mytton sometimes rode naked in the tradition of Lady Godiva and in 1826 rode a horse into a hotel, a venture later copied by Irish trainer Oliver Brady. In 2009 Brady led Pablo, the winner of the 2003 Lincoln, into the ballroom of the Glencarn Hotel in Castleblayney to liven up a Cheltenham Festival preview.

In Mytton's case, it was the Bedford Hotel in Leamington Spa, a centre of the hunting fraternity. Mad Jack rode Mad Tom up the grand staircase and into the first floor dining room, where he jumped over both tables and diners. More colourful accounts relate that he then jumped out of a window onto Union Parade although it is more likely that he was "with great difficulty" persuaded to take Mad Tom down the staircase instead.

On another occasion Mytton entertained a local parson and doctor for dinner at Halston Hall, waved them goodbye then dressed up as a highwayman and held them up on their way home.

He once bought a bear, named her Nell and rode her into a friend's drawing room. It didn't end well.

Unsurprisingly, Mytton's first wife died young and his second wife fled, leaving behind a son called Euphrates, named after Mad Jack's best racehorse. By then the money had run out and in 1831 Mytton fled to France to escape his creditors, returning in 1833 to die a year later in a debtors' prison. He is buried in the chapel at Halston Hall.

I don't know if Mad Jack Mytton will win but if he lives up to his name Richie McLernon is in for a hair-raising ride.

FIRST PUBLISHED 6:34PM, FEB 7 2017
He liked to share his interests with his horses, which was unfortunate for one named Sportsman, who died after drinking a bottle of mulled port