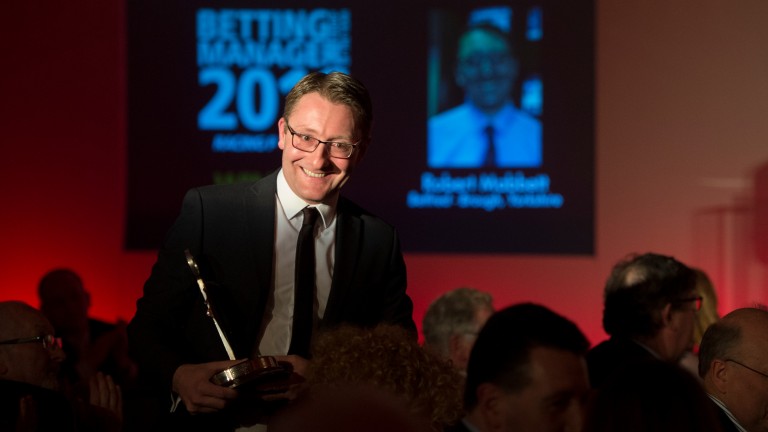 Robert Mabbett may have worked in betting shops for less than five years but his talent for the job was recognised on Monday when he was crowned Racing Post/SIS Betting Shop Manager of the Year for 2016.

Mabbett, the regional champion for the north-east, beat seven rivals including two colleagues from Betfred, to receive the prize from England World Cup hero Sir Geoff Hurst at the Jumeirah Carlton Tower hotel in London.

The 37-year-old was born in Brough, East Yorkshire and spent many years working in retail, eventually moving to Scotland and working for Sainsbury's.

However, in 2011 he returned to Brough and the following year began working for Betfred.

"I'm absolutely made up, what a journey, what a year," he said after receiving his award.

"This has been absolutely fantastic. It has been a wonderful experience to meet up with everyone here and massive thanks to the Racing Post and SIS for such a wonderful competition.

"I've not quite done five years yet but it's been absolutely wonderful. I went into a really good shop, learnt a lot and already had a great love of sport and customer service. We just took it up and ran with it with the great support of the team at Betfred."

Mabbett paid tribute to his deputy manager James Carter and "a wonderful team of cashiers".

As part of that environment, Mabbett's team had done a lot of community work in Brough.

"We did a cyclathon, raising money for the mental health charity Mind, we took part in the world's greatest coffee morning for Macmillan.

Mabbett acknowledged there was a lot of negative reporting about the industry, but he said: "They need to come and see us and they need to see us for what we are.

"We work really hard on social compliance. It's improved so much over the last few years and we work with it and try to do our best."

He added: "People need to trust us. They need to know we're doing a good job and actually a lot of people are enjoying their time with us."

It was a first victory in the competition for Betfred, although Totesport had won the prize twice before they were bought by Betfred in 2011.

"He'll be a great ambassador for our industry and it's well deserved. I would like to thank all the judges and everyone involved in this competition. This award is for everyone who works in our betting shops."

As part of his prize Mabbett, who has a wife, Nadine, and two children, Matthew and Andrew, wins a VIP trip to the Emirates Singapore Derby in July, courtesy of the Singapore Turf Club.

Paul Darling, ABB chairman
Robert's words to Lee [Mottershead] were perfect for these troubled times; he looks a fantastic ambassador for us all.

Alan Byrne, Racing Post chief executive
Fred [Done] has invested extensively in the industry and his staff, yet this is the first time his company has won and Robert has been worth waiting for. He is a superb winner.

Joe Scanlon, Betfred director of racing
It's fantastic for us to have won this for the first time; mind you, with three in the final we had a 40 per cent chance! Robert loves the industry and that shone through.

Bruce Millington, Racing Post editor
Robert is a worthy winner who brings a fresh perspective and left you feeling the future of betting shops is in safe hands.

Martin Cruddace, Arc chief executive
Robert came over superbly, and proved a great winner, not just for Betfred but for the entire industry.

What the judges said

Brough Scott, chairman of the panel
Robert emerges as a wonderful winner in an extremely high quality set of regional champions. I've no doubt he will prove a wonderfully positive ambassador over the coming year.

Richard Hayler, Ibas
Robert's obvious enthusiasm for working in a betting shop environment, combined with a series of impressive, professional, considered answers to the judges' questions saw him home in front of the most competitive ever final eight. I hope the betting industry can harness all of the dedication and talent shown in the judging process.

Helen Scott, SIS
Yet again we were treated to eight excellent performances at final judging; each year the quality and calibre never ceases to impress. All of us in this industry should feel extremely lucky and proud we have such talent representing us on the high street. Congratulations to Robert and his team, he's a very deserving champion.

Andrew Pennington, Racing Post
Robert is a truly worthy winner of this year's competition. It was a tough contest and all eight managers who made it to this stage deserve enormous praise. Congratulations to Robert and I hope he enjoys his 12 months as champion.

Tanya Stevenson, Channel 4 Racing
This is an annual highlight that never disappoints. All eight managers, together with their colleagues, proved to be superb ambassadors for the betting industry. There were long discussion and deliberations, evidence of how difficult it was to pick a winner. Thank you to all who took part for the insight and enjoyment; congratulations to Robert.

Nigel Boardman, SIS
Firstly a big congratulations to all eight regional champions, who are truly a credit to the betting industry. Robert and his team demonstrated everything that is great about the industry and he's a worthy overall winner in what was a highly competitive year.

Morag Gray, former BHA director
Being one of the Betting Shop Manager of the Year judges is a highlight of the year. All the 2016 regional champions are impressive and an excellent advertisement for the industry. It was a close-run decision. Well done to them all and to a superb winner.

Jim Cremin, Racing Post
All eight regional champions 'ran well' before us to emphasise the professionalism and talent within this business. Robert Mabbett emerged from a highly competitive north-east region, his easy confidence and pride in the game and his team helping him edge as competitive a field as we've ever had the privilege to meet.

Extracts from his original entry paper

In difficult financial times, with empty units all over our towns and cities, it should be celebrated that betting shops are not closing and they are good employers, providing both part-time work and careers.

My biggest challenge as a betting shop manager is being on the front line, responsible for promoting our products but also ensuring we do so in a responsible way, being a fun and welcoming place for customers to spend their leisure time, and making a valuable contribution to the local community. I want to help ensure betting shops are around for years to come.

My experience in betting shops is that many customers are placing the wrong bet for the type of selections they make. It would be helpful to develop an app that analyses and addresses this, assisting them to make an informed decision, while also helping the user staying in control.

As a young supermarket worker I was told, 'The first rule of management is that everything is your fault!' Nevertheless, the best part of my role is seeing people you have trained do well. Sir Richard Branson said it best: 'Train people well enough so they can leave, treat them well enough so they don't want to.'

What our mystery shopper said

Clean and tidy exterior, excellent internal. Manager and cashier had made effort for a charity event, manager had a bow tie on. Both friendly, chatty, knew their customers, yet were also very professional in dealing with clients. Manager dealt with test bet helpfully.

There were some ten customers, some on machines, lots eating cake and chatting with staff. Fair bit of chat between customers. It's a traditional shop in a local area. Customers were having a good time, plenty were there for duration of my visit. Nice atmosphere, would return and recommend.