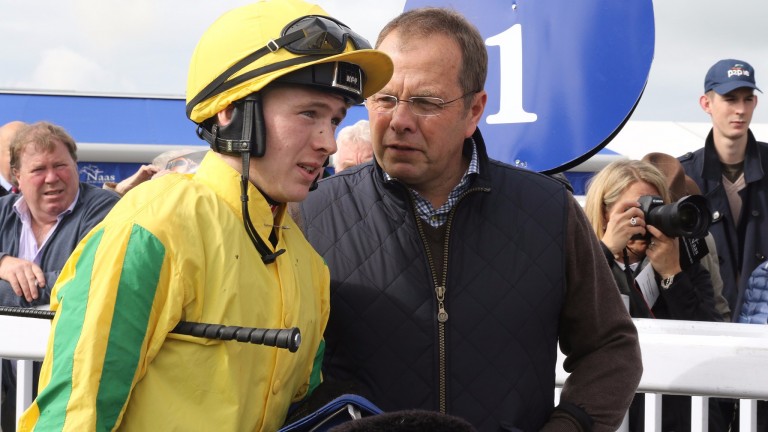 Colin Keane will be crowned Ireland's champion jockey for the first time when the season ends at Naas on Sunday and boss Ger Lyons intends to celebrate his stable jockey's title victory in style.

A treble at Dundalk on Wednesday and another winner there on Friday means Keane goes into the final meeting of the campaign with an unassailable 11-winner lead over nine-time champion Pat Smullen.

Lyons said on Saturday: "Becoming champion jockey is a huge achievement for Colin. When we got to the point that we realised we had a good chance of getting him across the line, chasing the championship became very important for all of us involved in the yard. It's been a huge team effort.

"I was more nervous about it than Colin, who remained his very calm self. The treble at Dundalk on Wednesday sealed it for him and that was a huge relief.

"I'm absolutely thrilled for him and for all of us. It has to be the highlight of my career, helping my stable jockey become champion jockey."

Keane has eight rides at Naas, four of them for Lyons, who has booked a box at the track to celebrate the jockey's achievement.

"I said to my wife Lynne during the week that we should take a box at Naas and invite as many of our owners as possible, and that Colin's family should come and enjoy the day too.

"We have runners and hopefully we might get among the winners, but the day will be all about celebrating Colin's title win.

"It will be a day without any pressure and a joyful occasion for all of us. Two more winners would give Colin 100 for the season and if that happens it will be the icing on the cake."

Keane's rides for Lyons include Mustajeer, a course winner three weeks ago, in the final race, the appropriately named Finale Stakes (4.00), a 1m4f Listed event in which Mustajeer's eight rivals include Tocco D'Amore, the mount of Smullen.

An impressive six-length winner at Naas in April on her only start, Tocco D'Amore is trained by Dermot Weld, who said: "She was very impressive winning her maiden and is a very smart filly. She met with a setback and it will be a big ask for her having been off the track for so long."

While the senior jockeys' championship has already been decided, the battle for the apprentice title goes to the wire, with Oisin Orr just one winner ahead of Killian Leonard (20-19).

Leonard has four rides on Sunday while Orr has two.

FIRST PUBLISHED 5:56PM, NOV 4 2017
I'm absolutely thrilled for him and for all of us. It has to be the highlight of my career, helping my stable jockey to become champion jockey