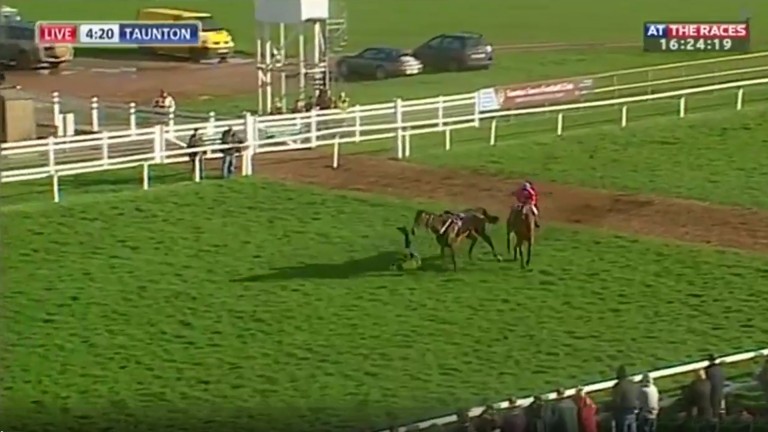 The writing may have been on the cards early.

Leg Lock Luke, named after the Welsh National-winning jockey turned broadcaster Luke Harvey, had not won a race under rules, but the 2m handicap chase he was set to run in didn't look like it would take much winning.

"Today could be the day you know," Harvey said before racing and, for much of the £6,000 contest, it looked like the stars had aligned.

Trained by Colin Tizzard for Terry Warner, the seven-year-old led four out and looked in full control only to veer badly left in the final 75 yards and unseat Tom O'Brien, leaving the door open for Bajardo.

A glum O'Brien would only confirm he was okay, while Harvey giggled when it was suggested the horse should have been named after Mick Fitzgerald.

One person definitely smiling was Bajardo's trainer Emma Baker, who was completing her first double after Back By Midnight Struck in the most valuable race on the card – the £11,000 2m2f handicap chase.

"Luck's gone our way," she said. "It's probably not the way you'd like to win, but everyone is up and you've got to make the most of days like this when you're a small trainer."

Baker, whose father Robert trained along with her great uncle and champion jumps trainer Ryan price, graduated from the point-to-point ranks and has only eight horses in her care, but there is room for more.

"We could take 25," she added before suggesting the Hollow Bottom, the scene of many Nigel Twiston-Davies post-race celebrations, would host another.

He said: "It's been a frustrating old year trying to get on horses with chances, but Emma's a good supporter and it's nice to repay her with a winner."

FIRST PUBLISHED 5:13PM, MAR 20 2017
It's probably not the way you'd like to win, but everyone is up and you've got to make the most of days like this when you're a small trainer