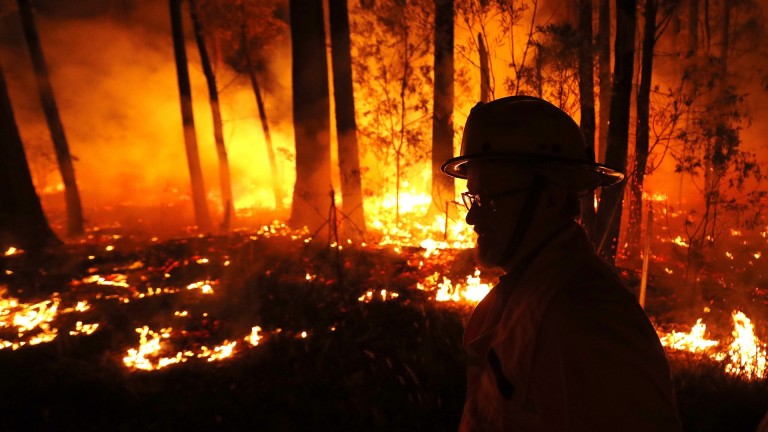 Bushfires have wreaked havoc throughout Australia
Darrian Traynor
1 of 1
By Andrew Wilsher UPDATED 10:15AM, JAN 12 2020

The aptly named racehorse Firefree escaped the bushfires across Victoria last week after being moved to a local stadium in the town of Gippsland.

Owned by Buchan resident Peter Sandy, Firefree was given his name because he supposedly lived in an area free of devastating bushfires, as Sandy could attest having lived there for 50 years without ever seeing one of consequence.

Sandy said: "His uncle was called Firetime, and when it came to naming him I just happened to mention that we've never been burned out here, that this end of the world just doesn’t burn. So we decided to call him Firefree."

But that all changed as the fires continued to spread and fast approached Gippsland, forcing locals to be evacuated to the football oval.

Sandy’s wife Robyn had been helping to prepare food at the stadium when her husband arrived with Firefree, who is trained by Cliff Murray and has won four of his last 12 starts.

"Peter arrived with him and just said, 'Look after him and don’t let him out of your sight'," she said. "He got a bit of angst during the night and didn’t like it when a couple of houses in town exploded, but he did bring comfort to my grandchildren."

Firefree’s last victory came at Moonee Valley in November, before he stayed on to finish fourth in the 2m7f Jericho Cup at Warrnambool, the longest Flat race in Australia.

Sandy added: "That Moonee Valley win was a big highlight for us, and we were so proud of where he ended up in the Jericho. We gave him a big pat after."

FIRST PUBLISHED 10:14AM, JAN 12 2020
He got a bit of angst during the night and didn’t like it when a couple of houses in town exploded, but he did bring comfort to my grandchildren

'We can't go back to the same old programme' - racing warned over fixture list RIP Alan Shone - sadly for racing, we truly won't see his like again First gamble foiled at Down Royal as Mullins-trained Shake Him Up only fifth Finalists announced for Irish Godolphin Stud and Stable Staff Awards 2021 Commonwealth Cup at Royal Ascot: the runners, the odds, the verdict Magners hits back in legal dispute over Cheltenham Gold Cup sponsorship