John Randall takes a look at racing's connection with the movies 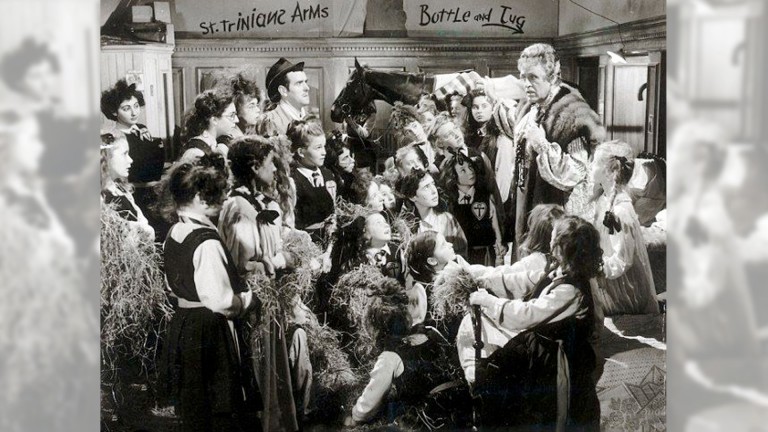 1 In the third James Bond film, Goldfinger (1964), there is a sequence set at the Kentucky stud farm owned by the title character just before he invades nearby Fort Knox. Bond is played by Sean Connery, who many years later owned Risk Of Thunder, the Punchestown banks specialist. The script was based on a novel by Ian Fleming, godfather of Brough Scott and great-uncle of David Loder.

2 Alfred Hitchcock was not a racing man but the sport makes an appearance in a few of his films. In The 39 Steps (1935) music-hall act and spy Mr Memory correctly names Humorist as the 1921 Derby winner, and in Notorious (1946) Ingrid Bergman and Cary Grant have an assignation at La Gavea racetrack in Rio de Janeiro. Grant was on the board of directors at Hollywood Park.

3 The classic crime drama Get Carter (1971) includes a scene at Newcastle races, where Michael Caine describes Ian Hendry's eyes as “piss-holes in the snow”. He commits one of his murders in the back yard of a bookies, where the commentary announces the Wincanton Tote Daily Double as £3 13s and therefore identifies the date as September 8, 1970.

4 Ivor Herbert is the only Cheltenham Gold Cup-winning trainer (Linwell, 1957) to write a film script. A journalist by profession, Herbert, together with one of his owners, director Frank Launder, wrote the screenplay for The Great St Trinian's Train Robbery (1966), starring Frankie Howerd. There are no racing scenes but in the first film in that comedy series, The Belles of St Trinian's (1954), the girls keep a racehorse in their dormitory.

5 The film of The History Boys, based on Alan Bennett's play, is set in 1983 but in one scene schoolmaster Hector (played by Richard Griffiths) reads a front page of the Racing Post, which did not start publishing until 1986. Griffiths was a racing fan and said: “I went to the Cheltenham Festival once, but never again. For someone as fat as me, it's impossible.”

6 The most vivid use of racing terminology occurs in the film noir The Big Sleep (1946) when the two protagonists sit in a restaurant and discuss their leisure activities. Philip Marlowe (Humphrey Bogart): “I can't tell till I've seen you over a distance of ground. You've got a touch of class but I don't know how far you can go.” Vivian Sternwood (Lauren Bacall): “A lot depends on who's in the saddle. Go ahead, Marlowe, I like the way you work.”

7 The Killing (1956), an excellent early Stanley Kubrick film, is not about racing even though most of the action takes place at Bay Meadows racetrack near San Francisco. It concerns a robbery and, in order to distract attention from the crime, the favourite is shot during a race. We see the horses go out on to the track several times as the action is depicted from different points of view in Rashomon style.

8 All racing anoraks know that My Fair Lady depicts the field racing the wrong way round at Royal Ascot, The Godfather has a horse's severed head placed in a Hollywood producer's bed, and The Sting involves a climactic $500,000 bet that has to be “placed” on a horse. The horse is Lucky Dan running at Riverside Park, Kansas City, and he duly finishes second.

9 The film whose cast were the biggest racing enthusiasts may be The Rainbow Jacket (1954), about a young apprentice involved in corruption. Supporting players Robert Morley and Wilfrid Hyde-White were keen racegoers and owned several horses in partnership, while Edward Underdown, who portrays a trainer, was a prominent amateur rider on the Flat as well as an actor. Even Sir Gordon Richards makes a brief appearance. The film inspired Willie Carson to become a jockey.

10 The most famous film in which racing is the subject matter is probably still National Velvet (1944), in which, contrary to popular belief, Elizabeth Taylor does not win the Grand National; her mount is disqualified. The climactic race consists of authentic newsreel footage of Aintree in the 1930s intercut with shots of the field jumping fences on a Pasadena golf course with tropical foliage. Many years later Taylor owned horses in California with John Gosden, who said she preferred petting them to racing them.

FIRST PUBLISHED 6:00PM, AUG 26 2017
Many years later Taylor owned horses in California with John Gosden, who said she preferred petting them to racing them