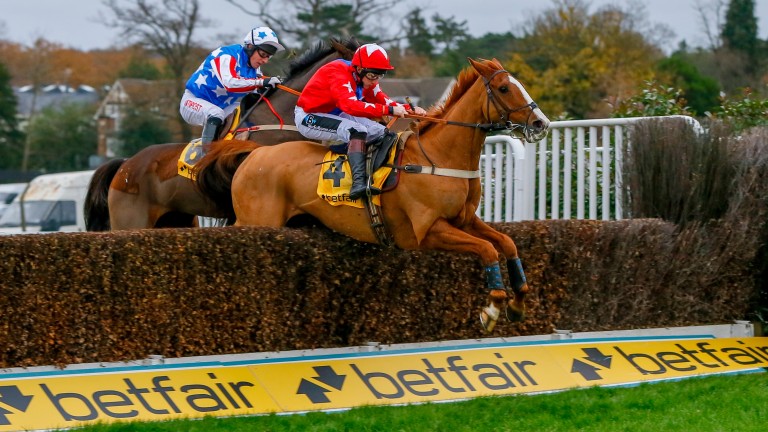 Gary Moore has run two or more horses in the same race plenty of times, but he has never been in a situation like today's, when stable stars Sire De Grugy and Ar Mad go head to head under two of the trainer's sons in one of the jumping calendar's most enduring highlights.

Moore has a share in Sire De Grugy, but he insists that will not be a factor in his emotions as he watches the race unfold. He is hopeful of a positive outcome one way or another on what will be a massive day for the family, with eldest son Jamie on Sire De Grugy and youngest son Josh on Ar Mad.

On this card 12 months ago Sire De Grugy won his second Tingle Creek in somewhat controversial circumstances from Special Tiara, little more than an hour after Ar Mad had announced himself a two-mile novice to reckon with by running away with the Henry VIII Novices' Chase.

Dual winners of this Betfair-sponsored Grade 1 are relatively commonplace and include true greats like Kauto Star and Moscow Flyer, but only fellow Queen Mother Champion Chase winner Flagship Uberalles, one of whose wins was in a Tingle Creek transferred to Cheltenham, has won the race three times.

Sire De Grugy was close to his best when winning an Ascot handicap last time and he has a fitness advantage over the four years younger Ar Mad, who was ruled out of Cheltenham reckoning by a condlyar fracture, but the youngster goes a great gallop and is a superb jumper.

Moore, who has pointed out that Ar Mad was around 25 lengths quicker than Sire De Grugy over the course and distance a year ago, said: "They are both in good form with themselves and everything has gone to plan. The only thing we haven't got is the ground. I'd have liked it a bit softer for both of them.

"It looks as if there will be plenty of pace on, with Un De Sceaux and Ar Mad, and that might just set it up for a finisher."

He added: "I don't need to tell the boys anything. They've both ridden them enough both times and they know what they're doing. I'll just wish them luck and hope both horses do themselves justice."

Ar Mad
Pros Josh Moore is unbeaten in five rides on Ar Mad, including a spectacular Grade 1 novice win on the corresponding card
Cons Not seen on the racecourse since he was injured in build up to the Arkle

FIRST PUBLISHED 6:00PM, DEC 2 2016
I don't need to tell the boys anything. They've both ridden them enough both times and they know what they doing. I'll just wish them luck and hope both horses do themselves justice