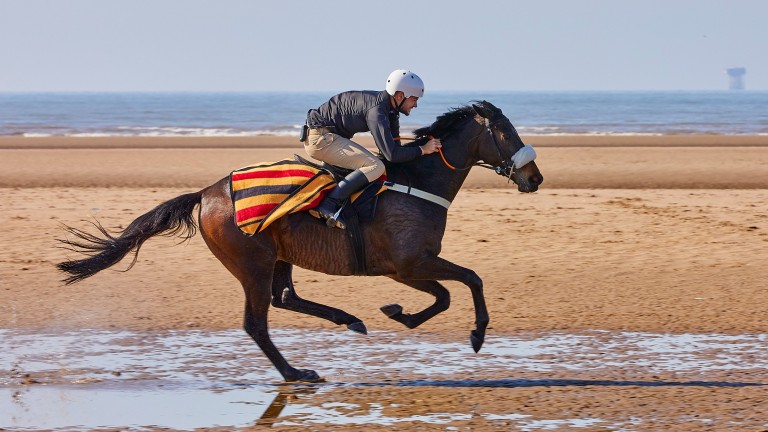 Love Island star Chris Hughes emulated the legendary Red Rum in a gallop on Ainsdale Beach in Southport on Tursday.

Hughes, who rides out for Jonjo O'Neill, recreated the famous scene as Tiger Roll bids to win the Grand National for the second successive year on Saturday.

No horse has done that since Red Rum, who landed the great race in 1973, 1974 and 1977 and was trained in Southport by Ginger McCain, who galloped Red Rum on the beach to treat his pedal osteitis, a disease of the hoof that was reportedly eased by the seawater.

Hughes rode out on the Oliver Greenall-trained Spoilt Sam, wearing the same outfit from the images of Red Rum, including a white helmet, black top and plain jodhpurs.

The reality TV star said: "Like everyone I love the Grand National. Red Rum is a true sporting legend and I couldn’t think of a better way to pay tribute. Riding out on Ainsdale beach was certainly different to anything I’ve ever done before."

A poll of 2,000 people conducted by Coral found that Red Rum was the nation’s favourite Grand National winner, winning 27 per cent of the votes.

David Stevens, of Coral, who helped recreate the beach scene, said: "With Tiger Roll bidding to become the first back-to-back winner of the Grand National since Red Rum, we thought we should pay tribute to Red Rum’s legacy. With his passion for racing and connection to Love Island, Chris was the obvious choice to recreate these iconic images."

Hughes, who was at Aintree on Thursday, will be Coral's Champion Club ambassador at the course on Saturday.

FIRST PUBLISHED 3:31PM, APR 4 2019
Red Rum is a true sporting legend and I couldn?t think of a better way to pay tribute to the nation?s favourite racehorse