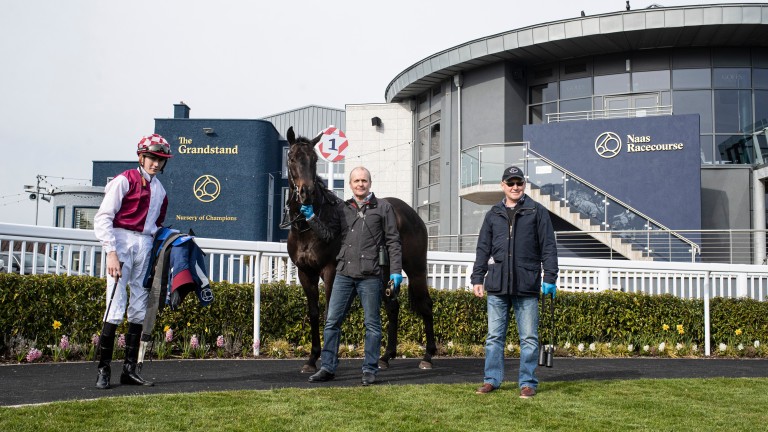 The scene at Naas on March 23, the first day of the Irish Flat season. The same venue stages day two on Monday
Patrick McCann (racingpost.com/photos)
1 of 1
UPDATED 7:06PM, JUN 7 2020

After more than two months of unprecedented concern and uncertainty, Irish racing bursts back into life at Naas on Monday with a hectic eight-race spread that should leave us all gasping for air by the time it is done. It’s the most welcome prospect – a privilege, even.

Right now, as the easing of Covid-19 lockdown measures is being accelerated and numbers contracting the coronavirus continue to relent, a sense of hope and optimism has begun to prevail.

It remains a fragile and unmistakably apprehensive emotion, but its presence is undeniable.

Where there was doom and gloom, there is now tentative relief at the semblance of some small cause for cheer. Racing in Ireland has the honour of channelling that sentiment into something with which a public starved of domestic sporting activity can engage.

It is quite the opportunity, although one that comes with a considerable degree of responsibility as well.

All eyes will be on our great game and its noble equine protagonists, but the industry showed across ten meetings before lockdown that it can execute its increased obligations proficiently.

Horse Racing Ireland and the Irish Horseracing Regulatory Board, whose senior medical officer Dr Jennifer Pugh has been to the fore in the evolution of a necessarily exhaustive 77-page document that legislates for the prevention of Covid-19 being transmitted at a race meeting, recognise the gravity of what’s at stake.

The public health requirements are paramount, of course, but the extent to which the racing and breeding sectors have become dependent on racing resuming and then continuing to gradually return to some semblance of its grand old self is also starkly grave.

When the sport was suspended in Ireland due to the foot and mouth outbreak in 2001, there were 49 days without an end product in the shop window. Racing here didn’t cease for any notable period during World War Two, and there was a hiatus of only around six weeks when the 1916 Rising erupted in the midst of the Great War.

Come Monday, 76 days will have passed since an Irish race meeting was held in anger. Stasis for one-fifth of the entire year.

It remains an utterly debilitating predicament that won’t relent all of a sudden when the gates crash open for the cavalry charge that will be the five-furlong maiden at 2.55 or when Sceptical strives to validate his Royal Ascot credentials in the Anglesey Lodge Equine Hospital Woodlands Stakes, but at least the wheels will be in motion once more.

And how those wheels will spin on Monday. In all, there are 134 runners, with four of the eight races fully subscribed at 18 apiece, and a further three races just one shy of the maximum. A modest 11-strong field will go to post for the Woodlands, the purse for which is a not too shabby €37,500, down from €45,000 in 2019.

If Sceptical, a Godolphin castoff acquired by owner James McAuley for just £2,800, is to keep the Diamond Jubilee riches-to-rags-to-riches dream alive for trainer Denis Hogan, then he will have to see off some proper opposition.

Forever In Dreams, one of last season’s fairytale stories for her small-scale Tipperary handler Aidan Fogarty, brings proven Group 1 credentials to the table, having been second in the Commonwealth Cup before signing off on 2019 with a third-placed finish in the Champions Sprint at Ascot.

Although Sceptical is the highest rated on 114, Fogarty’s four-year-old is the one with the most robust form. Sergei Prokofiev, trained by one of Fogarty’s more obscure neighbours in the Premier County, is no slouch either.

That chap, who goes by the name of Aidan O’Brien, also unleashes a previously unsighted colt called Battleground, whose dam Found won a couple of big middle-distance contests at Chantilly and Keeneland a few years ago. Can't recall what they were.

Anyway, as the narrative of the Guineas fallout has reminded us, 12-furlong races aren't cool anymore. Speed is all the rage now.

Good job, then, that the second day of the Irish turf season, 77 days after the first at the same Kildare venue, roars into action with six successive heats between five and six furlongs.

A swift resumption after all.

Fairyhouse Easter festival
Cancelled, although the intention is for the Irish Grand National to be rescheduled later in the year

Punchestown festival
Cancelled, but some of its feature events may yet form part of an enhanced autumn NH programme

Irish 2,000 Guineas and 1,000 Guineas
Set for the Curragh on Friday and Saturday after being pushed back from initial May 23 and 24 slots

Irish Derby and Pretty Polly Stakes
Will remain on their original dates on June 27 and 28, meaning the Derby at Epsom will be held after the Irish event for a first time

Summer festival changes
Galway’s seven-day gala will take place on its scheduled dates but the cards will now be exclusively Flat or jumps, while other festivals at the likes of Killarney and Bellewstown have been broken up into individual fixtures

FIRST PUBLISHED 6:00PM, JUN 7 2020
All eyes will be on our great game and its noble equine protagonists, but the industry has shown it can execute its increased obligations proficiently

Can Andrew Balding emulate his father Ian and become champion Flat trainer? Can Mother Earth continue Aidan O'Brien's fine French form in the Rothschild? Ryan Moore: 'I try not to offend anyone but for me it's always about the horses' Trainers' title race blown wide open - and we might just have a fairytale winner This time it will be tears of joy if Lady Bowthorpe can land famous Group 1 win 'The more rain the better for Trueshan' - trainer quotes on the Group 1