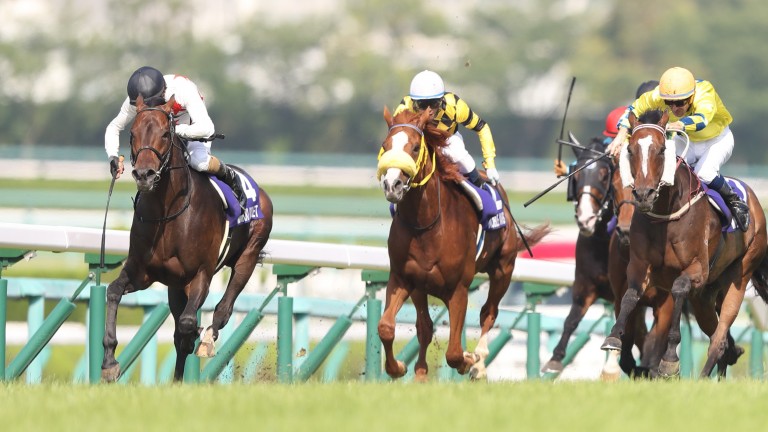 Mikki Rocket (black cap) is chased down by Werther (right) but holds on at Hanshin
Masakazu Takahashi
1 of 1
By Peter Scargill 11:19AM, JUN 24 2018

Mikki Rocket provided his rider Ryuji Wada with a first Grade 1 for 17 years after holding the late thrust of Hong Kong star Werther.

The decisive moment came at the top of the home straight, when Mikki Rocket was driven through into a clear lead by Wada.

In contrast to Mikki Rocket who stuck close to the rail, Werther, a multiple Group 1-winner in Hong Kong, had to come widest of all before bearing down on the leader.

Unfortunately for jockey Hugh Bowman, he ran out of time and went down by a neck, with Noble Mars third and Dubai Turf runner-up Vivlos back in fourth.

Mikki Rocket was scoring a first Grade 1 win, while Wada was bringing a long wait for another top-level success to a close. He said: "I wasn’t aware of Werther coming from behind me but I was awed by my horse’s ability to maintain his speed all the way to the wire."

The winner of the Tarakazuna Kinen earns an automatic starting place in the Breeders' Cup Turf and a ballot exemption for the Caulfield Cup. However, trainer Hidetaka Otonashi indicated the long-term aim for the winner would be the Japan Cup in November.

He said: "He has overcome his bad habit of missing the break which gives him a better chance in the race, and his position in the race was up to my rider to decide as he knows the horse well.

"He does have a tendency to lean to the inside so maybe that was the reason Wada let him hug the rails and nicely covered early in the race. I just prayed that he’d make it to the finish as Werther came strongly from behind."

He added: "Now he’s a legitimate member of the Grade 1 ranks, his autumn programme, I think, will probably start with the Kyoto Daishoten with the Japan Cup the aim."

FIRST PUBLISHED 11:19AM, JUN 24 2018
I wasn’t aware of Werther coming from behind me but I was awed by my horse’s ability