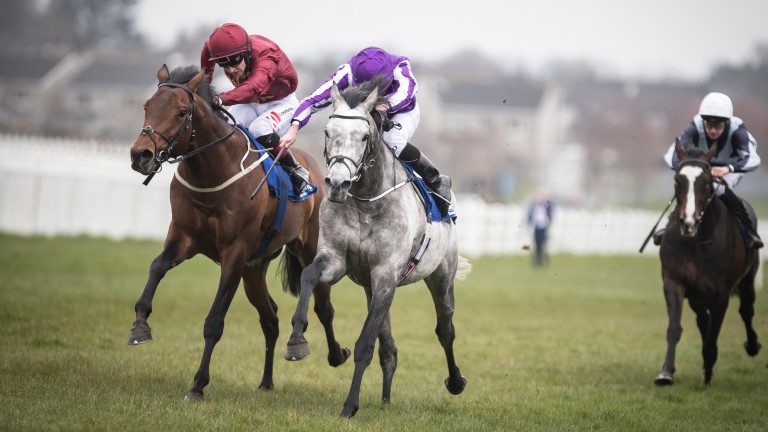 Capri (grey) and Ryan Moore get the better of Cannonball in the Alleged Stakes at Naas in April
Patrick McCann
1 of 1
By Paul Fielder UPDATED 8:03PM, SEP 14 2018

Last year's St Leger winner Capri is set to put his Prix de l'Arc de Triomphe credentials on the line when he returns from a long absence in Sunday's Prix Foy at Longchamp.

The Aidan O'Brien-trained four-year-old has been off the track since landing the Group 3 Alleged Stakes at Naas in April, but is just 20-1 in places for the Arc on October 7.

O'Brien said: "He's had a long break and is just ready to start back. We're happy with him but he will improve a good bit for the run. We'll see how things go but the present plan is to run him in the Arc."

Capri, who beat just one home in last year's Arc, faces five rivals in the 1m4f Group 2 including a trio of Andre Fabre runners, Talismanic, Waldgeist and Cloth Of Stars.

Japanese raider Clincher and the Antonio Marcialis-trained Way To Paris complete the field.

Paddy Power make Talismanic and Waldgeist their 2-1 joint-favourites for the Foy, with Capri next best at 3-1.

O'Brien's Hunting Horn and Charlie Appleby's Brundtland are set to clash in the six-runner Prix Niel, but they face stiff opposition from the Pia Brandt-trained Neufbosc, runner-up to Kew Gardens in the Grand Prix de Paris last time out. Neufbosc is the general 6-4 favourite for the Niel.

William Hill make Kitesurf their 9-4 with Worth Waiting, who is chasing a five-timer, available at 3-1.

FIRST PUBLISHED 1:56PM, SEP 14 2018
The Aidan O'Brien-trained four-year-old has been off the track since landing the Group 3 Alleged Stakes at Naas in April