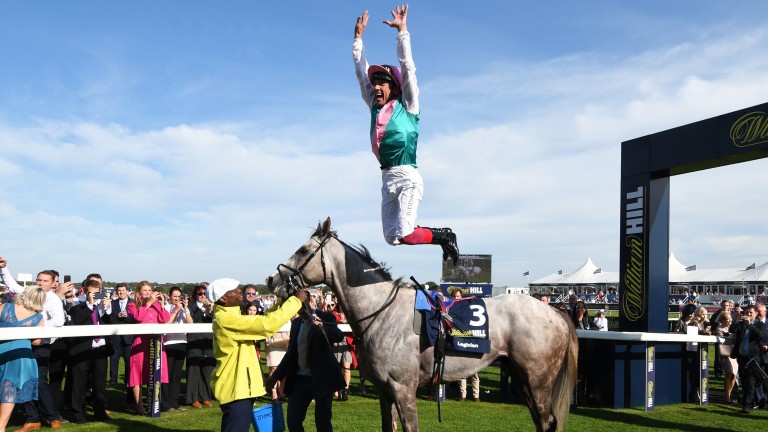 Logician: maintained his unbeaten sequence with victory in the St Leger
George Wood
1 of 1
By David Carr UPDATED 5:57PM, SEP 14 2019

Frankie Dettori and John Gosden have given their followers plenty to shout about in their year of years – but the shout can rarely have been this loud.

The sonic boom of encouragement might have put off many a lightly raced colt but not this three-year-old, who did not make his debut until May but already has the relaxed temperament of a seasoned professional.

The roan, who had looked the obvious St Leger winner since he ran away with last month's Great Voltigeur Stakes at York, followed the script to the letter.

He may have drifted left but he never looked like failing to collect and came home in track-record time, two and a quarter lengths and a head clear of the Mark Johnston-trained pair Sir Ron Priestley and Nayef Road.

"I heard the roar but we get it five seconds later," Dettori said. "When I got it I was almost on the line! He was the favourite and there are almost 30,000 people here, I'm sure everybody lumped on him – the favourite obliged and everybody is happy!"

The rider, who also shared the first of the trainer's wins in the race when partnering Shantou to victory in 1996, received his first hint the colt could be Classic material when he was requested to give up a Thursday evening in July.

He recalled: "John was always keen on this horse. He made me go to Newbury one evening and ride him in a handicap – I thought it was a bit strange. Obviously he had big targets in mind and he showed in the Voltigeur he was a good horse."

It was not lost on the day-of-race punters who sent the favourite off at 5-6 and Dettori was always confident of securing his 15th Group 1 win of the year.

He said: "He probably wants a bit more give, that's why he's got a tendency to go right. I let him drift to the stands' side but I knew from two out I'd won."

It was Gosden's 12th top-level success of 2019 and Dettori reflected: "It's been a great year for the great trainer that I work for. He's got plenty of ammunition and he provides me with plenty of good horses in big races. I'll enjoy this moment then it's back to the drawing board and get ready for the Arc in three weeks."

With Dettori referencing his bid for an historic third Prix de l'Arc de Triomphe on Enable, and with the wondermare set for retirement, Logician could just take her place for the team next season.

He is as short as 14-1 and seen as a mile-and-a-half horse in the making rather than a stayer.

"The ground probably helped him stay the trip, rather than being testing," Gosden said. "He won in a course-record time with one flick of the stick.

"I think probably a mile and a half will be absolutely right up his alley but this is a Classic, this is the Leger and Prince Khalid was keen to come to it. He breeds these lovely horses and he wants to come and win a Classic for Frankel, which is what we've done. A Frankel filly won the Oaks and now we've won two Classics in the same year.

"He's a gorgeous horse, he's done nothing but improve through the year. He's amazing to be around, he's got this wonderful stride and this laid-back attitude."

Logician is reckoned to have done enough for this season and is now set to rest until 2020.

"He's come on a long journey to win a Leger in track-record time," Gosden said. "We'll put him away until next year now. I don't want to be taking advantage of him in any way."

Aidan O'Brien's Sir Dragonet is also likely to revert to shorter distances after finishing fourth. Jockey Donnacha O'Brien said: "I think he's probably a real mile-and-a-half horse and will be a lovely horse next year."

FIRST PUBLISHED 3:46PM, SEP 14 2019
He was the favourite and there are almost 30,000 people here, I'm sure everybody lumped on him - the favourite obliged and everybody is happy!

Four things we learned on the fifth and final day at Royal Ascot Oisin Murphy lands top jockey honours as Foxes Tales storms to Golden Gates win 'Hopefully he's not finished yet' - Rohaan continues his remarkable rise Dream Of Dreams edges out Glen Shiel to finally get his Diamond Jubilee 'What a filly' - Wonderful Tonight a Royal Ascot first for delighted connections Doyle Force: Creative rider off the mark for the week as Appleby bags a 1-2