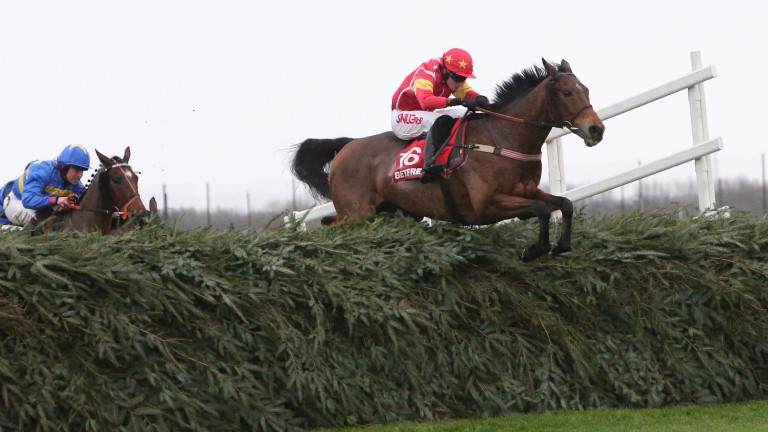 Highland Lodge and Henry Brooke sail over the last to win in the Becher Chase a year ago
JOHN GROSSICK RACING PHOTOGRAPHY
1 of 1
By David Milnes 6:00PM, DEC 2 2016

Henry Brooke bids to make a dream return to the big stage on last year's winner Highland Lodge just four days after returning from the crunching fall that many thought had curtailed his season altogether.

Brooke has made a low-key return around the northern tracks this week after recovering from the punctured lung and broken ribs he suffered at Hexham on October 8 and is hopeful of a follow up on Highland Lodge who sprang a 25-1 surprise when overcoming today's rival Dare To Endeavour 12 months ago.

Brooke said: "It was always my main intention to come back for this ride and Highland Lodge felt in great order when I sat on him at Jimmy Moffatt's last week. He enjoys the fences and hopefully he can give me another nice spin."

If successful, Highland Lodge would be the first back-to-back winner of the race although two have won it twice, most recently Hello Bud (2010 and 2012), who was trained by Nigel Twiston-Davies, reliant on last week's Hennessy third Double Ross and Cogry this time around.

Not surprisingly in such a stamina test, lowly weighted runners have prospered in recent times with no winner carrying more than 10st 12lb since 2009.

Kim Bailey, trainer of The Last Samuri
It was a cracking performance in the National and the ground will be more suitable on Saturday although the trip will be shorter than last time. We also have a different jockey [Brian Hughes] so it's going to be interesting. The National is the ultimate aim and this is a prep race for it.

Colin Tizzard, trainer of Viconte Du Noyer
Of the Potts horses, we thought this fellow might make a three-mile chaser and he won nicely first time for us at Cheltenham. He looked a strong stayer that day and the plan would be the National. He has a good jumping technique and should handle the fences.

Neil Mulholland, trainer of The Young Master
It's his first cut at the fences but he has schooled well under Sam Waley-Cohen over the National type fences in Lambourn. We'd hoped to give him a prep run but the ground has been too quick but he's ready to roll.

Nigel Twiston-Davies, trainer of Double Ross and Cogry
Double Ross ran a superb race in the Hennessy last week and seems to have come out of it in good shape. There aren't any other races for him coming up so were giving it a go. Cogry has had no luck at all this season and was brought down by another horse last time. He's schooled well since and has no weight so hopefully he can bounce back.

Gordon Elliott, trainer of Ucello Conti
He's in good form and he's fit enough although he should come on for the race. He ran very well over the fences in the National, so we're hoping for a good run.

Tom George, trainer of Saint Are
He needed his first run badly but then showed a bit more of his old sparkle last time. He loves the track and it looks as if he's going to get his ground for once. It was too soft for him in last year's Becher, and then too soft again in the National.

Mouse Morris, trainer of Rogue Angel
He had a slight wind problem and just wasn't getting home so he had a small operation and that seems to have made a difference. He'll probably have another run and then we would plan to keep him fresh for the Grand National.

David Pipe, trainer of Vieux Lion Rouge
He obviously ran a great race in the Grand National and we have had this race in mind for quite a while. He would have appreciated softer ground but we remain hopeful he'll go well.

Ben Pauling, trainer of Silvergrove
Conor Shoemark rode him in some schooling this week and his jumping was electric. If any horse was made for those fences it's him and we are out to win as he's around 5lb shy of getting a run in the Grand National at present.

Alan King, trainer of Midnight Prayer and Ziga Boy
Midnight Prayer finished third at Haydock a couple of weeks ago and has come out of that race well. He stays and jumps and deserves his place in the field.  This has long been Ziga Boy’s main target. He always needs his first run to blow away the cobwebs and the drying ground will suit him on his first try over the National fences.

Jennie Candlish, trainer of Beeves
We had planned to run him in the cross-country race at Cheltenham until it was called off. It's his first time over the National fences and he has a low weight. We hope for a clear round.

Jimmy Moffatt, trainer of Highland Lodge
It was soft ground when he won this last year and obviously we would like conditions to be replicated as much as possible, but if you dip back in his form he had run some good races on good ground, including when he was fourth in the Hennessy.

Lucinda Russell, trainer of One For Arthur
He's an awesome horse to watch schooling which is why I think he has a good chance even though it's his first time over the fences. Derek Fox (jockey) is excited about his chances and he must have a big chance if he takes to it.

Ian Duncan, trainer of Milborough
We think he will handle the fences but you don't know until you try. If he does it would open up other doors.

Eric McNamara, trainer of Dare To Endeavour
He's in great form. He was second in the race last year and it has long been the plan to go back for another go. I'd be happier if the ground was softer.

Oliver Sherwood, trainer of Financial Climate
He's way out of the handicap as we didn't think we were going to get in the race. He ran a massive race in it last year and if we can grab some prize money it will be happy days.

FIRST PUBLISHED 6:00PM, DEC 2 2016
If any horse was made for those fences it's him and we are out to win as he's around 5lb shy of getting a run in the Grand National at present