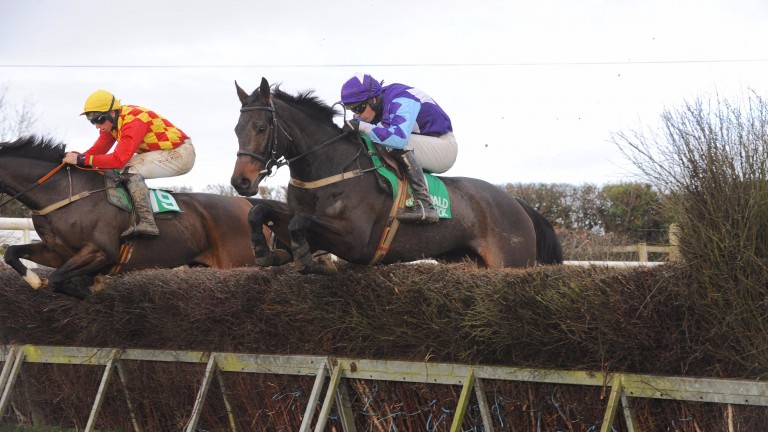 Local rider Mark O’Hare had a day to savour as he enjoyed a treble on Saturday.

The debutant showed a smart turn of foot to quicken nicely up the hill before the last then romped home in the fastest time of the day to beat Newlands Cross by 15 lengths.

McNeilly, a sister-in-law of northern handler Warren Ewing said: “We really took our time with him and put plenty of schooling into him to give him confidence before we raced.

“I would love to keep him but ultimately we bought him with the thought of selling on.”

This nicely bred Beneficial gelding is out of the Lalor family’s Carrigeen Lily, a Grade 2 winner over fences at Leopardstown.

O’Hare’s other two winners on the card were supplied by trainer Jerry Cosgrave, who did not have far to travel from his Shanrod Stables in Ballela, Katesbridge.

Ballela Magic provided Cosgrave with his first success of the season when landing the Noel McParlan five-year-old and upwards mares’ maiden.

Unlucky when falling three out on her Maralin debut, the daughter of Kalanisi was sent off the 5-4 favourite. But she didn’t have it all her won way.

Having raced prominently throughout, she was joined on the run-in and had to battle hard to hold off the challenge of Ardean Lass.

Ballela Magic, who is from the family of Cheltenham Festival winner Glens Melody and bred by Stephanie and Andrew Warren, was knocked down for €2,200 as a three-year-old at Tattersalls November sales in 2014 and runs in the colours of the trainer’s brother Liam Cosgrave in partnership with Anita Acheson.

Cosgrave completed his double and O’Hare his treble in the concluding McIldowie Solicitors Belfast older geldings’ maiden with the odds-on favourite Incitatum, a capable track recruit.

The son of Arcadiohas twice placed over hurdles, including at Fairyhouse last April off a mark of 102, but he was forced to battle hard on his return between the flags.

However, in an exciting finish, he held off the returning Sprintingforgold by a neck.

The Bangor-based Thunder and Lightning Syndicate have owned the horse for four years, although he only joined Cosgrave in the spring.

Cosgrave said Incitatum, who was purchased by Roy Wilson at the Goffs Landrover sale in 2012, is likely to reappear in a winners’ race before heading for a hunter chase.

Local connections enjoyed plenty of success on the card with the RTD Crawford Ltd five-year-old geldings’ maiden going the way of father and son combination Sean and Noel McParlan with As The Crow Flies.

The Presenting gelding jumped off in the lead and, although challenged at the second-last, he quickened clear again to win in impressive fashion.

Previously fourth in a bumper at Perth over the summer, the winner had finished a length behind Jalamie at Maralin a fortnight ago.

McParlan senior said: “We thought he would run well today and thankfully he did his job.

“He is a great wee horse and he could either go for a winners’ race or back to a bumper.”

Out of the unraced Robin Des Champs mare Regle D’Or, he is a half-brother to the Colin Bowe-trained graded hurdle winner Little King Robin.

Ridden prominently by his novice rider, the Desert King gelding relished the underfoot conditions and stayed on well in a thrilling finish to defeat the favourite Benarty Hill by half a length.

It has been a profitable campaign for the seven-year-old as he has been at least placed in each of his four starts this term.

Bred by Aaron Stronge and owned by Family H Syndicate, Kraken Tale will continue pointing for the season.

The eight-year-old was a three-time winner on the track when under the care of Henry De Bromhead, but the bay gelding had shown signs of falling out of love with the game when refusing to race in both the Bet365 Gold Cup at Sandown and the Paddy Power Chase at Leopardstown on his two latest outings on the track.

Having his first start for Dreaper, however, the son of Gold Well showed a renewed interest as he made smooth progress to come from the rear in the hands of Jamie Codd to defeat Clondaw Frisby by four lengths.

Tom Dreaper, who was representing his father Jim, was quick to praise event rider Nicola Ennis for the work she does with Grand Jesture at home.

Dreaper also hinted a hunter chase campaign could now be the plan for the winner.

Despite racing keenly for much of the opening stages, Benatar producing a striking turn of foot to ease clear of his rivals in the home straight. He looks a classy recruit